DeChambeau Changes the Face of Golf

Golf is a game that is steeped in tradition and “proper” methods of play. Coaches and players have stuck almost religiously to these rules for centuries, regulating everything from the style of clubs and the attire, to the swing and various modes of play. Those in the past who have ever challenged these conventions were typically met with hostility.

Bryson DeChambeau, nicknamed “The Scientist,” is the latest in the historic minority of people who have challenged the conventions of the game, and is doing so in spectacular style. His U.S. Open win in September 2020 was his first major championship victory, helping to vindicate his unique approach to the traditional game. But, what exactly is the difference in DeChambeau’s approach? Who is Bryson DeChambeau, and how has he come to be Golf’s new “bad boy”?

Far from being a sudden shift away from convention, Bryson DeChambeau began his unique style back in his teens. He read a book by Homer Kelley, “The Golf Machine: The Curious Quest That Solved Golf.” What did this subversive tome teach him?


In short, it taught him to forget everything he thought he knew about the golf swing. Even non-golfers have heard some of the typical advice: keep your arms loose, relax, bend like a reed, and so on. DeChambeau instead proved this wrong by adopting a stiffer swing that was nonetheless easier to repeat consistently.

When he was just 17, he also decided that the decades of standardized production and millions of dollars spent creating ‘correct’ golf irons were also all wrong. He asked his coach Mike Schy, “Why can’t all the clubs all be the same length?” Others scoffed, but DeChambeau got it done, and the results spoke for themselves. His contention was that if the irons were the same length, it would be easier to repeat his new standard swing. Once again, he proved the skeptics wrong.

When you picture the average golfer, and even professional golfers, the very last thing on your mind would be the tower of muscle that DeChambeau has become at age 27. 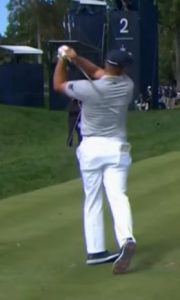 After a revelation in late 2019 that adding muscle mass and looking like an NFL linebacker might improve his long game, he set out to achieve that. Via a combination of weightlifting, protein shakes, and sheer discipline, he initially added 20 pounds of muscle mass before the pandemic-driven PGA Tour break. He added another 20 pounds during that hiatus, bringing his total to 40 pounds.

What pushed this growth? As usual with DeChambeau, what drove him was the desire to improve himself. The truth is that DeChambeau is a reflective and self-critical player. He is always looking at himself and his game and asking what he can do better. In this case, he believed that adding muscle mass would assist him in adding distance and power to his drives. He was certainly proved right.

After returning with his new 40 pounds of muscle, he quickly became the leader of the pack, beating a previous drive record in 2018 of 411 yards with an unbelievable 428 yards. The changes have also impacted his ball speed, helping him to achieve a new average of 186mph, with some speeds reaching up to 199mph.

DeChambeau’s workout plan involved emphasizing isolation exercises, and not compound movements as one might have expected. DeChambeau proving once again that he’s a bucker of trends, because he feels training the muscles individually helps them to function better as a whole later on. Besides isolation exercises to work each muscle, DeChambeau also favored bodyweight movements and strength-training exercises. Together these have helped his individual muscles to excel, and the additional size and weight have delivered a stability that he now relies on to maintain a consistent swing.

When you understand the journey DeChambeau has taken to get where he is now, it starts to become clearer why he snagged his first major tournament win at the U.S. Open. Even more important than winning the title is where he achieved this victory, the infamous Winged Foot in Mamaroneck, New York.

Over the 6 U.S. Open tournaments and a slew of other major competitions held there, Winged Foot has humbled some of the greatest golfers in the world. In 2020, 61 golfers headed up to the par-70 Winged Foot to try their hand on this challenging course. Among those 61 players, only one managed to get below par – Bryson DeChambeau. 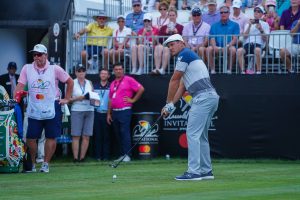 It wasn’t a sure thing from the get-go. The final day could have gone to several of DeChambeau’s competitors, including the leader in the third round, Matthew Wolff, as well as South Africa’s Louis Oosthuizen, or fellow Americans Harris English and Xander Schauffele. In the end, however, all were taken back into the black, leaving DeChambeau alone in the blissful red zone of below par.

DeChambeau himself puts the win down to discipline and focus on the right areas, especially speed control. He was quoted in The Washington Post, “My putting was immaculate…My speed control, incredible. That’s why we worked so hard on my speed control.”

Highlights of his final round included birdies on the 4th and 11th holes. Most notable was an incredible Eagle on the 9th that helped make up for a bogey on the previous hole. He had also managed an eagle on the 9th during Round 2. His final tally overall was 6 under, achieving under par in every round except the third.

It seems that in the end, a disciplined and personalized approach does work wonders. Perhaps the most significant thing about DeChambeau’s recent win is that it eschews the same “facts” about the game that we’ve been taught and sold on for so many years.

It confronts us with a more interesting reality that shaping the game around yourself is as important, if not more important, than learning and conforming to specific rules and conventions.

Play within the rules, but outside the conventions – this sums up DeChambeau’s unique new style.

By Tim Marose|September 24th, 2020|Golf News|Comments Off on Bryson DeChambeau’s Incredible Journey to Win the U.S. Open
Go to Top