What is a golf calcutta auction ?

What is a golf calcutta auction ?

Have you been invited to a tournament where there is a Calcutta auction? A golf Calcutta is a popular tournament format and one that many private golf courses will use for their member-guest events. With these member-guest tournaments being so important for the club, there are usually strict rules and regulations surrounding the Calcutta golf tournament.

If you have always wondered how these tournaments work and want to make sure you are not one of those golfers who have no idea what they are getting themselves into, you are in the right spot. Here is everything you need to know about a Calcutta auction.

What Is A Calcutta In Golf

A golf Calcutta is a golf tournament format where teams are bought, and payouts are made based on a team’s performance. When playing in a Calcutta, there is an auction the day before the event where golfers can bid on other teams that will play in the event. There are specific rules of a Calcutta that are important to understand.

Some Calcutta golf tournaments can have a lot of prize money involved. This is something you will want to fully understand before getting yourself involved in the pool.

How Does A Calcutta Work

Let’s take a look at the steps of a Calcutta auction and tournament. If you are participating in a Calcutta as a golfer or as tournament organizers, here are the steps that you will need to follow.

The night before the Calcutta golf tournament starts, the auction is held. The auction consists of organizing all of the teams that are in the event and allowing everyone to bid on the team that they think will win. 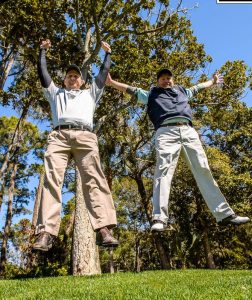 Only the highest bigger will be able to buy the team. When you buy a team you are essentially gambling and betting that they are going to be the first place team when the tournament is over. The interesting thing about auctions is that you may or may not know much about the teams you are betting on.

The team handicap will be shared, and golfers will use the information they know about the players and the game of the players to form their opinion about who the best team is. If a team contains two excellent players, chances are the team will sell for quite a bit of money.

When the team that you are playing on has been bough, the owners can negotiate with you to sell back a percentage of the team to you. Some golfers will buy back their team at 100%, and others will purchase just 10% or so of their own team.

Not all Calcutta events allow for buyback, so you will have to check with the rules of the Calcutta auctions that you participate in.

Once the Calcutta auctions are completed, it is time for the teams to hit the course. The Calcutta tournaments are stroke play events, and they are usually a team best ball type event. Typically players will have 18-36 holes on the course over a day or so.

The winner of the tournament, the second place, and the third-place team are the most important. These are typically the teams that are going to payout as part of the Calcutta.

If there are ties for the winning score, there are playoffs to determine the official winner and winnings.

Once all of the teams have finished playing and find out who has won, the payout occurs. The payout in a Calcutta will be heavily favored to the winning team. The winning bigger who correctly chose the first place team will receive 70 percent of the prize money, the second-place team will get about 20 % of the pot, and the third place will get 10%.

Some Calcutta tournaments will only pay first and second place; this is important to consider and remember when you are participating in the auction and investing your money in these teams.

Now that you have a better idea of how this golf tournament is played, there are probably some outstanding questions about the rules and the format.

Is A Golf Calcutta Legal?

A golf Calcutta is legal in some areas but not legal in all states. If you are a tournament organizer and thinking of putting together a Calcutta event, you must first make sure that it is legal in your area.

The USGA typically does not encourage this type of event because there are times that the bidding, betting, and payout money can get a little extreme. The amounts paid out to players can be enough to disqualify someone from their amateur status.

Can An Amateur Play In A Calcutta?

An amateur that plays in a Calcutta is risking their amateur status. When you are an amateur golfer, you cannot be paid to play golf. If you are caught gambling, you could end up losing your ability to play in large national or local amateur events.

Most amateur golfers are never going to go and play in the US amateur; however, if your plans are to play in amateur tournaments, the Calcutta could ruin this for you. If you are a golfer that plays for fun and partakes in a bit of gambling, you probably don’t need to worry about the impacts on your amateur career.

Where Can I Play In A Calcutta Golf Tournament?

A Calcutta in golf is held at a private golf club most of the time as part of their member guest tournament or member/member event. Because these events require people to bid and bet, you won’t see too many Calcutta events played at public courses.

Entering into one of these events could end up taking a bit of work, but for the most part, if you are a member of a private country club, your club will likely have one once or twice per year.

How Much Money Can I Make In A Calcutta Golf Tournament?

Some Calcutta tournaments, even at a small private country club, can reach over $30,000 in the pot. This is why these tournaments become so interesting to golfers, and they want to ensure they have a chance at winning.

The exciting thing about Calcutta is that it is not always who plays the best but instead who was able to receive the most bets and play the best. You have to be in it to win it with a tournament like this.

Money in a Calcutta tournament will vary depending on the size of the field, the location of your event, and whether or not you are a bit better. IT may make sense to start at a smaller Calcutta event and get used to the idea before entering into one of these large options.

Can Golf Software Programs Set Up A Calcutta?

Luckily you do not need to run a Calcutta tournament entirely on your own. Through the years, golfers have come to learn that the Calcutta is one of the more difficult tournaments to run. There are many moving parts, and you may be dealing with large sums of money at times. The best thing to do is to use the help of golf tournament software.

Is It Difficult To Run A Calcutta?

Running a Calcutta can be quite complicated. You will have to deal with scoring and, most importantly, money management. Anytime you are managing money like this for an event, you must be very careful and accurate.

Ensure that you are keeping excellent records and that you can justify to anyone in the tournament where the money is and how it is being paid out. You must remain responsible during this process to ensure that you will run a great event.

Hopefully, you now understand a bit more about a golf Calcutta tournament. These events can be very exciting and a lot of fun. As a group that is leading comes into the final few holes, they will probably realize what all that wagering will mean when it comes to the winner and the prize money involved. Do your research before Calcutta to ensure you put your money in the right place.

By Brittany Olizarowicz|May 24th, 2021|Golf instruction|Comments Off on What is a golf calcutta auction ?