How to Create Lag in a Golf Swing

Home/Golf, Golf Training/How to Create Lag in a Golf Swing

How to Create Lag in a Golf Swing

I remember the first time I saw a really great golfer drive off the tee, producing amazing power. He told me it was all about clubhead speed and creating a lag in the swing. So I started wondering how to create lag in a golf swing.

The way to create lag in a golf swing is by having the correct contact order of the arms, wrists, and clubhead at impact. It’s all about kinetic energy. The order is elbows first, then hands, and then the clubhead through the ball.

Knowing what the lag in a golf swing is and the order of the kinetic chain is one thing. Being able to create this clubhead speed on a routine basis is the goal. Let’s talk about lag and exercises to perform in order to train your body to create it.

What Exactly Is Lag?

Lag is the power move in a golf swing that will give you distance and striking power. It gives you clubhead speed and a release at the perfect time. When done correctly, the club is at its fastest when it comes into contact with the ball. It is created with an angle between the left forearm (of a right-handed golfer) and the shaft of the club.

A golfer with good lag looks like they have incredible rhythm in their swing. It’s smooth. It isn’t tight and jerky. A lot of amateur golfers either have little to no lag, or they release too soon, and the clubhead is actually slowing down when it contacts the ball.

Ways To Create Lag in Your Golf Swing

Even though lag will happen naturally when you swing the golf club, it’s a good idea to practice these methods. This will ensure you create lag and get used to creating lag.

Let The Equipment Do The Work 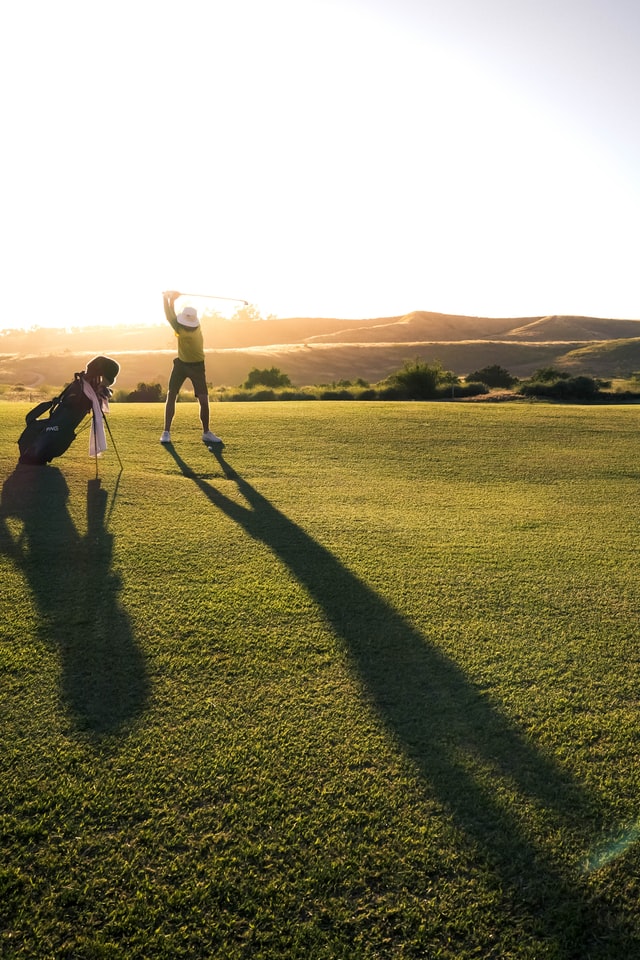 Sports equipment keeps evolving. Think about how different golf clubs are now from even 5 years ago. Every year there seems to be major innovations in golf equipment. Golf clubs are made to generate golf head speed. They are designed to put the ball into the air.

Golf club shafts are flexible so that they can generate speed and power at the point of contact. Use that flexibility by creating lag with your elbows and wrist cock. When swinging the club, you should feel the weight tugging at your hands.

The golf ball is dimpled so that when it spins at high speed, it rises in the air. Many amateur golfers think they have to hit under the ball in order to get it into the air. This is the opposite of what is true. Actually, hitting down on the ball will utilize the angle of the clubface and the dimples in the ball to create loft. Trust the equipment.

The Pros Use Tempo

Years ago, there was a bestselling golf book called Tour Tempo. The basic concept of the book was that every tour pro had one of three possible tempos. The book even came with a disc that let you practice each tempo with audible beeps. One beep to start the backswing, a beep to stop your backswing, and the final beep for contact.

The result of this tempo is really a smooth swing, with speed and lag. That’s it. That’s why they call Fred Couples “Boom Boom.” It’s a tempo that creates confidence and looseness. Think about dancing. You would never dance to a beat being stiff. Same deal here. Loosen up and get the lag.

We can see that lag is really the result of a fundamentally sound golf swing. Once we are able to put everything together, we shouldn’t even have to think about it.

Ben Hogan said he always led with his elbows. Sergio Garcia says that it feels like he is pulling down a rope. It’s funny how they don’t really explain lag. But we can look at PGA pros and see what they do.

Ben Hogan created an angle between his forearm and golf shaft of around 16 degrees. That’s a small angle and a ton of wrist cock. It looks exaggerated.

Many tour professionals will not even mention lag. Why? I think a major reason is that lag is a natural byproduct of a really good golf swing. After years of hitting balls with a great swing, these small things amateurs look for are just natural.

That’s the objective. To break down your swing into parts. Then put them together, so they become natural. Then it’s second nature. Great golfers will think about their shot. Think about where they are going to put the ball. However, the mechanics are so in tune with their muscles that it is second nature.

Lag is often called “the secret sauce” of the golf swing. There is nothing secret about it. The only thing is that to perfect a lag in your swing; you need to have a natural and fundamentally sound golf stroke. That takes practice, but you can get there with the drills pointed out above.

Thanks for visiting AEC Info. Be sure to check back often for the latest updates, reviews, and test results from golf products online.

By admin|January 29th, 2021|Golf, Golf Training|Comments Off on How to Create Lag in a Golf Swing
Go to Top