While shopping for new golf equipment to add to your collection, you can’t decide between forged or cast irons. You keep asking yourself, “what’s the difference between these two types of irons, and which is best for you and your skill level?”

The main difference between forged and cast irons is in their manufacturing process. Forged irons are made of a single piece of steel that has been heated, pounded, and rolled into the desired shape. Cast iron clubs are created by pouring molten metal into a pre-made mold to create its form. 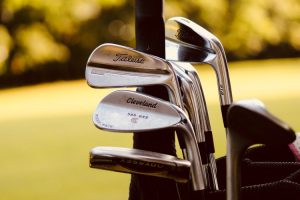 These different manufacturing processes result in irons that are either more Forgiving or allow better control of your shots.

Differences between forged and cast irons

Considered a more traditional club, forged irons have been around for a long time. This type of club is made after a single steel bar is heated and pounded hundreds of times to create the desired shape.

How forged iron clubs are made?

First, a billet of steel is heated to 1200 °C (2192 degrees Fahrenheit), then pounded with an air hammer into an initial basic shape of an iron. The bar is taken to a grinder, where the rough edges are smoothened before reheating.

After reheating, the hot metal is hammered and rolled into the final shape. Groves, score lines, and iron numbers are stamped into the head before the hosel cylinder is added. Finally, the club head is polished and electroplated using Nickel Chrome before being attached to a shaft.

With forged iron clubs, you can easily curve a ball, adjust its trajectory, or control ball flight for more accurate shots if you hit the sweet spot.

Since you don’t enjoy the forgiveness that comes with cast irons, forged iron clubs act as game-improvement irons that force you to be more consistent and focused on your swings.

You can see all of our top-rated Golf Irons here.

One of the main cons of forged irons is their lack of forgiveness.

Since forged irons are made from a solid piece of metal, most of their weight is concentrated in the middle and back, resulting in a smaller center of gravity (sweet spot). Due to this small sweet spot, many beginner golfers tend to hit the ball off-course when using forged iron clubs.

While it may be an advantage to the avid golfer looking to improve their game, the lack of forgiveness that comes with forged irons may be frustrating to a beginner or average golfer.

Additionally, a budget-conscious golfer might not want to use forged irons because they are typically more expensive than cast irons.

Cast irons are a relatively new type of club on the market. First manufactured in the mid-1970s, cast irons immediately gained popularity among novice and recreational golfers. 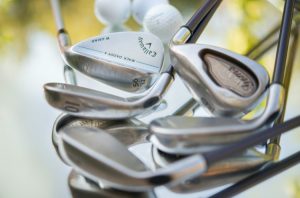 How cast irons are made?

Using CAD software, the head is designed before production. This design is then used to shape the iron heads.

A stainless-steel head is then heated to 1500 °C (2732 degrees Fahrenheit), turning into a molten state. The liquid metal is poured into the pre-made mold, creating the club head.

The iron is left to cool before being removed from the mold. The hosel and other accessories are added to the head before polishing and sandblasting.

Cast irons are significantly the most forgiving irons compared to forged irons. This is because cast iron clubs have a thicker face, which results in a larger sweet spot, meaning that many of the shots you take will be on target regardless of where you hit them on the club’s face.

For high-handicap players, this increased forgiveness will ensure you keep your score low. Unlike forged irons that are made from soft steel, the casting process uses a harder type of steel that’s more durable. This use of harder steel also results in increased ball speed and better distance control.

Check out this article to learn about the best iron for high handicap golfers.

The main disadvantage of cast irons is that they have less quality feel and feedback compared to forged irons.

While the increased forgiveness may be advantageous to a novice or recreational golfer, you receive less feedback on your swings. This lack of feedback is undesirable to experienced golfers looking to improve their swings and lower their scores even further.

How do you decide on forged or cast irons?

With an understanding of the differences between these two types of irons, let’s look at the factors to consider when choosing whether to buy cast or forged iron golf clubs. 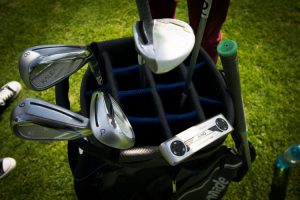 Cast irons will serve you better if you have a high average score over par (anything over 20, which equates to a bogey per hole). With their increased forgiveness, cast iron clubs will help you keep your score low and improve your game.

You can consider switching to forged iron clubs if you have a low average score over par (par or a birdie per hole). While you may experience an increase in your average score, the improved feedback and golf ball control will help you to improve your game even further.

Cast irons are usually the more affordable option. Cast iron clubs are your better choice if you’re on a limited budget.

But cost aside, forged irons are an excellent way to improve your game. With their increased quality and feel, forged irons will help you lower your score and take your game to the next level.

A desire to improve your game

If you’re serious about improving your game and are willing to put in the time and effort to achieve this goal, then you may need more than cast iron clubs. With their increased forgiveness, these clubs will keep your score low but won’t help you improve as much as forged irons will.

You can hit different shots with forged irons, including lower trajectories, Golf draws vs fades. This versatility allows you to learn more about your swing and work on improving it.

Are forged irons better than cast?

While both forged and cast irons have their advantages, the best choice for you depends on your needs and wants as a golfer. If you’re an experienced golfer looking to shave off those extra strokes from your game, go with forged iron clubs.

But if saving money and having more fun is your primary goal, consider cast iron clubs. No matter which type of irons you choose, with a bit of practice and the right mindset, you can take your game to the next level and become a better golfer.