What Is Four-ball in golf? (EXPLAINED in Detail)

What Is Four-ball in golf? (EXPLAINED in Detail)

Golf has lots of different formats and terminology. If you have been asked to play in a four-ball match or stroke play golf event, you may be wondering what this entails.

Let’s take a more detailed look at a four-ball competition and all that is involved in playing one of the most popular formats in the game.

How do you play Four-ball golf?

There are two four-ball golf tournament formats; you can play a four-ball stroke play and a four-ball match play event. These events consist of two-person teams that are playing to get the lowest score and beat their competitors. 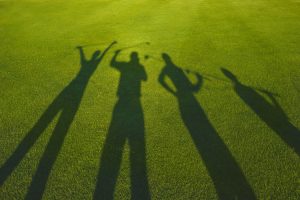 The four-ball event can be played as a stroke play or a match play event.

What’s the difference between foursomes and four-ball?

Although you may think that the term foursome refers to the group of four people playing golf together, foursome is actually a form of stroke play in which a team will compete and have one team score.

The more common name for foursome is an alternate shot tournament.

With a foursome’s match, there will be four players divided into two teams. Each player will alternate the shot they hit with the same golf ball, so players go back and forth between each other. The hole scores that are the lowest will be the winner.

Players must alternate who tees off on each hole to ensure that the match is fair. Amateur golfers tend to struggle with the alternate shot stroke play competition because it puts quite a bit of pressure on the player taking the shot at the time.

There are two four-ball formats, match play, and stroke play.

With the stroke play event, you will have each player compete until their ball is in the hole. At the end of the score, the lower of the two scores is the match score and is counted for the team. This can be done in both gross numbers and net numbers.

The form of match play four-ball is a bit different because it will be played in a different way at the end of every hole. If you or your teammate have the lowest score for the hole, you will win the hole in match play.

All strokes in stroke play need to be counted, but in match play, holes can be conceded without penalty strokes.

AEC Info recently completed an informational article on What is match play. 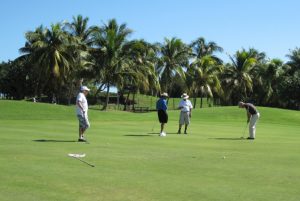 Fourball scoring may change based on the match play or stroke play format. For the most part, you will have to play your own ball until it gets into the hole.

Match play can be a potential advantage as you can sometimes declare a loss of hole and move on to the next one.

The stroke score, however, will continue to add up, and you must count each of the shots.

With four-ball scoring, pay close attention to the gross and net scoring. Some events that have handicaps involved will impact the overall scoring and how the match is played.

Handicaps in four-ball can easily be applied to the match. Many team competitions are not fair because the players have very different handicaps. The team format of foursomes typically allows players to use their full handicap and everyone plays off of the low player in the group.

This means that in a handicap competition, if you have a player that is a 6 handicap and all other players are a 12 handicap, all of the other players will get six shots from the best player in the group.

The handicapping and strokes will be the case regardless of which team you are on. The handicap system is the only way to give everyone a an equal chance of winning by leveling the playing field.

You can learn much more about How golf handicaps work here.  If you were wondering how your golf handicap compares to others, please visit How to tell if you have a good handicap.

Some of the other names for the four-ball format can be called best ball or low ball. The individual player that scores the lowest score within the match is the score that counts.

Whether you are playing this as the match play format or the stroke play format, the overall concept of a four-ball match remains the same.

Just like in a typical round of golf with friends, there are some penalties that you will need to be aware of in a four-ball competition.

Although players can sometimes share clubs and will have times where they can help each other out, you won’t want to incur a penalty for your team because of a lack of rule knowledge.

Penalties Other Than Disqualification

When facing penalties other than disqualification, you may have to take a stroke or even two strokes, but the match can still continue. Many times, the penalties in a four-ball will apply to one player only and not the entire team.

Penalties of disqualification are typically completely unfair and make it so that the match cannot continue.

Hopefully, you now understand the basics of a four-ball in golf. 4-ball is a very common Betting game on the golf course.  This format can be enjoyable, and players who are good can learn when to take an aggressive shot and when to lay off and make an easy par.

This is typically called ham and egging it, and when you find your best partner, you will want to make sure you keep them to play plenty of matches.

By Brittany Olizarowicz|June 2nd, 2022|how-to, Information|Comments Off on What Is Four-ball in golf? (EXPLAINED in Detail)
Go to Top