When you hear the word “golf”, I am sure you think of perfect greens, golf carts and teeing off. However, there is another game of golf that we are going to learn how to play. This is a card game, and it’s a lot of fun.

The game is great to play for young kids to grandparents. The rules are simple once you get the hang of it. These instructions will cover everything you need to know to get started playing Golf (card game).

What you need to play – Six card golf

To start out, you just need a regular deck of playing cards that includes jokers. This game uses all the cards in the standard deck. You can play with up to 2-4 players with one deck of cards. If you have more players, you will need an additional Decks of Cards.

To begin, one player will be the dealer. Shuffle the cards well and begin dealing. Every player will be dealt 6 Face-Down Cards. You do not get to look at your cards at this point in the game. Once every player has their 6 cards, the dealer will place the remainder of the deck in the middle of your playing-space face down.

They will then flip the top card face up and set it to the side. This will become the discard pile. Here is an example after the deal of the 3 person game. 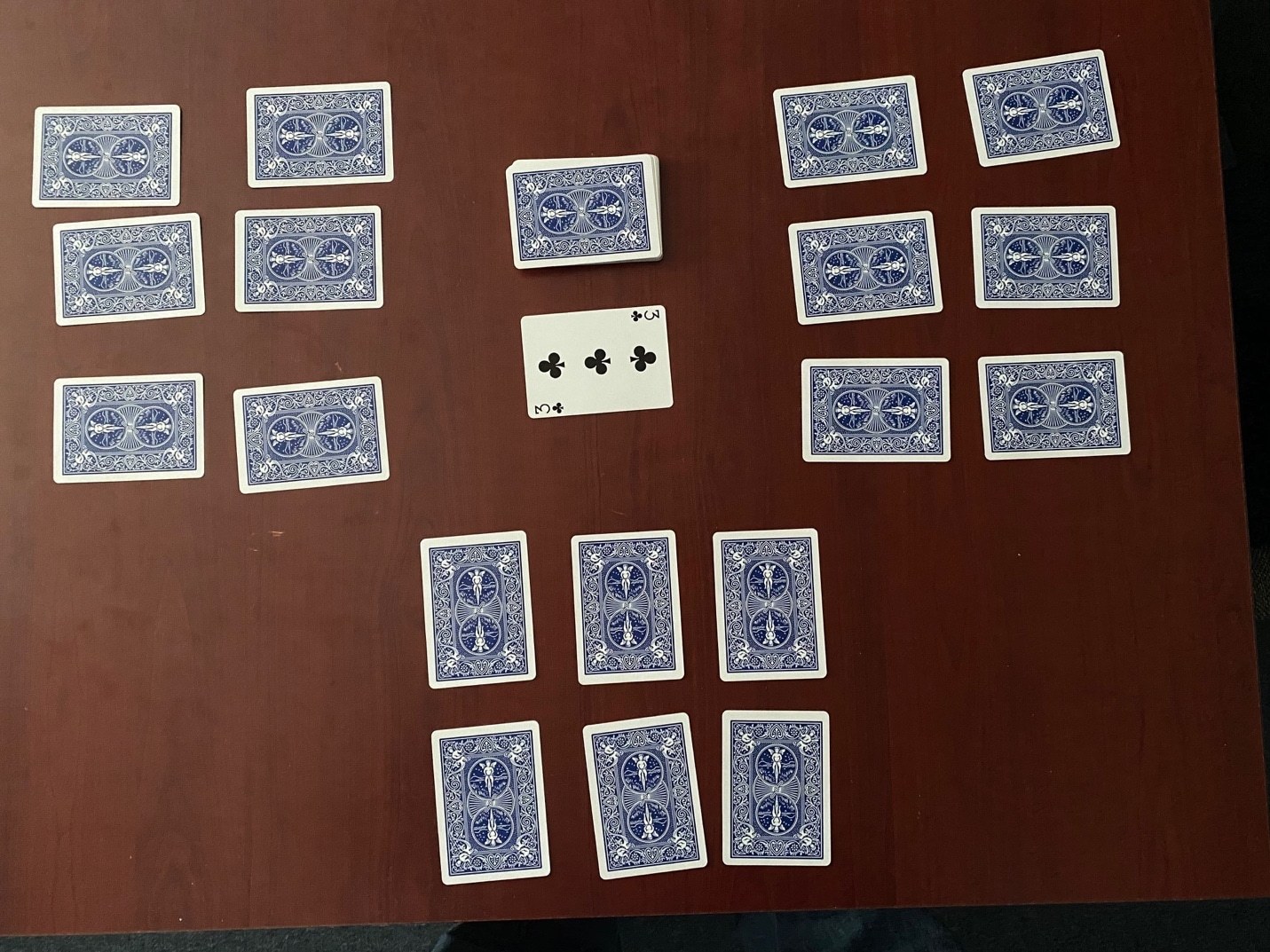 Every player should arrange their 6 cards in a 3 x 2 pattern. It will be three cards across, and two cards down. Keep your cards face down while you are arranging them. Since you can’t see what the cards are, what order you put them in does not matter.

(Pro Tip) – to speed up each round, players may start each round with 2 to 4 cards flipped up as seen below.

How do you score in the card game golf?

An Ace is worth 1 point while numbered cards from 2 through 10 are face value. Jacks and Queens are both worth 10 points. A Joker is worth -2 points.

A pair of cards being equal in value in the same column scores zero points for that particular column, even if the cards are Jokers. (Remember, Jokers can give you a negative score in card golf. Think of it like being below par.)

The objective of the game is to earn as few points as possible. The lowest score wins. So you want to continue flipping or turning cards over looking for a Power card or scoring cards.  Those that will get you the lowest points. (Or if you think about golf, you want the lowest score possible).

Each game consists of 9 rounds, (or 9 holes. You can also play 18 holes) and the player with the lowest combined cumulative score at the end of the 9 rounds wins the game. Each type of card has a point value. These are broken down above:

One of the goals is to end up with cards that are worth the least amount of points at the end of each round. Additionally, there is another way to reduce your number of points you score. If you have matching cards in the same row (one on top of the other), this is called a “set”.

These cards would cancel each other out, so both are worth 0 points. So, as we go into the play and the objectives, remember that sometimes picking up a card worth more points is a good strategy if it means you can cancel out another card.

In a 9-card game, start your round going after the lowest cards, and work to “pair up” your unpaired cards. If you draw Kings, Aces and Jokers, you want to stock pile these cards.  You want to remove penalty cards if they are not paired.

An example of a penalty card would be having a Jack or 10, unpaired in your 3×3 grid. These single cards scores much higher and can easily inflate your overall score if someone were to go out.

The player to the left of the dealer will go first. They begin by flipping over 2 of their cards. Which 2 from the card deck they decide to flip over is their choice. 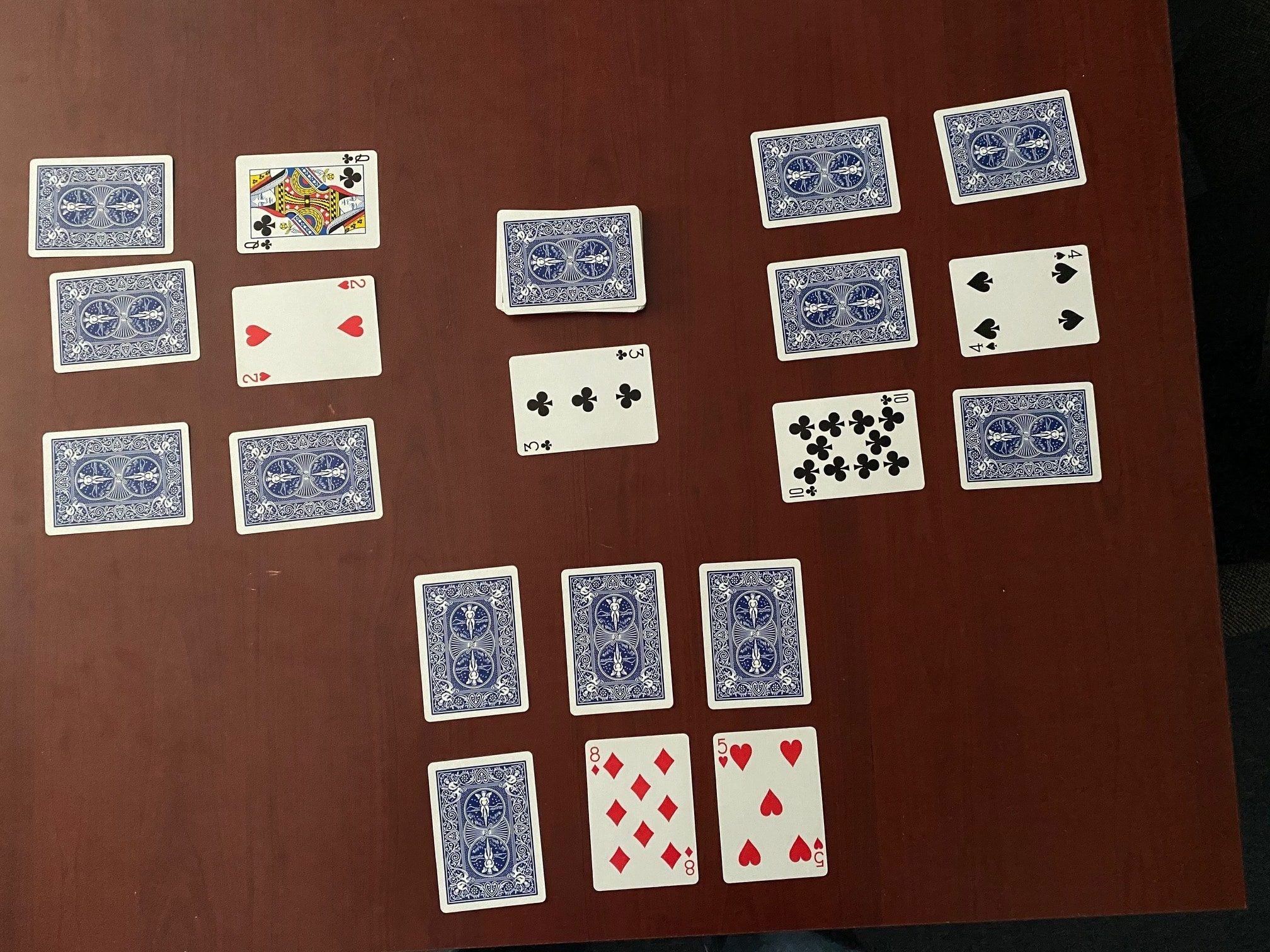 At this point, they have two options. They can take the card that is face up in the discard pile if they feel it’s a good option, or they can draw an unknown card from the draw pile.

You would want the face up card from the discard pile if it matches one of the cards you turned over, or if it’s low enough in value that you think it will be better than the cards currently in your hand. This can be tricky, as at this point you cannot see all of your cards.

At no point do you have more than six cards in your hand. For every card you draw, you have to discard one of your current cards. This can be a card you have already flipped over, or a card that is still face down. That is part of the game where luck comes in to play.

Every time you trade in a card that was face down, you run the risk of giving up a good card and passing it off to other players.

So, after the first player has flipped up 2 cards, picked up a new card and discarded, it’s the next player’s turn. They will follow the same steps, flipping up 2 cards of their choice, drawing a card from either the discard pile or the deck, and trading in one of their lesser value cards to discard.

Each player will do this until every player has taken 1 turn, ending with the dealer.

The Rest of the round

They can choose to flip up a card, in which case they do not draw any cards and their turn is over. As a second option, they can draw a card from either the deck or the discard pile (only the top card) and exchange it for one of their cards.

Just like in the first rotation, the new card can be exchanged for either a card that is already face up, or a card that has not been turned over yet.

Once every other player has taken their last turn, all the remaining cards that are face down get turned face up, and each player will then calculate their points. You will want to keep a tally, as you will do this for 9 total rounds.

For each round, rotate who will be the dealer, going clockwise from the last dealer.Winning

At the end of the 9 rounds, whoever has the lowest combined score wins the game!

Variations of the golf card game

While these rules are the standard rules, there are some variations. Try these different options to make golf even more interesting.

Waiting until someone “knocks”

To up the stakes, you can wait until someone “knocks” to indicate the last round of the game rather than the last round starting as soon as one player has all of their cards facing up. In order to “knock”, the player still has to have every card facing up.

However, this allows players to be more aggressive in making sure their score is lower. Once a player is confident in the cards they have, they can knock on the table to let the other players know that they will only get one more turn.

There are versions of scoring for golf that are different than the one listed here. Some players use the Jokers as a wild card, where you can choose what card a Joker will be once you have one.

This is especially helpful in cancelling out higher cards by making a “set” that leaves you with zero points. Some versions also use the 2 card as -2 points rather than face value.

4 in a box, all opponents get 50 points. If you are get 4 cards in a box using the middle row and an end row during a round, all other players receive 50 points for that particular round or hole. This is a great strategy if losing by a large margin late in the game. 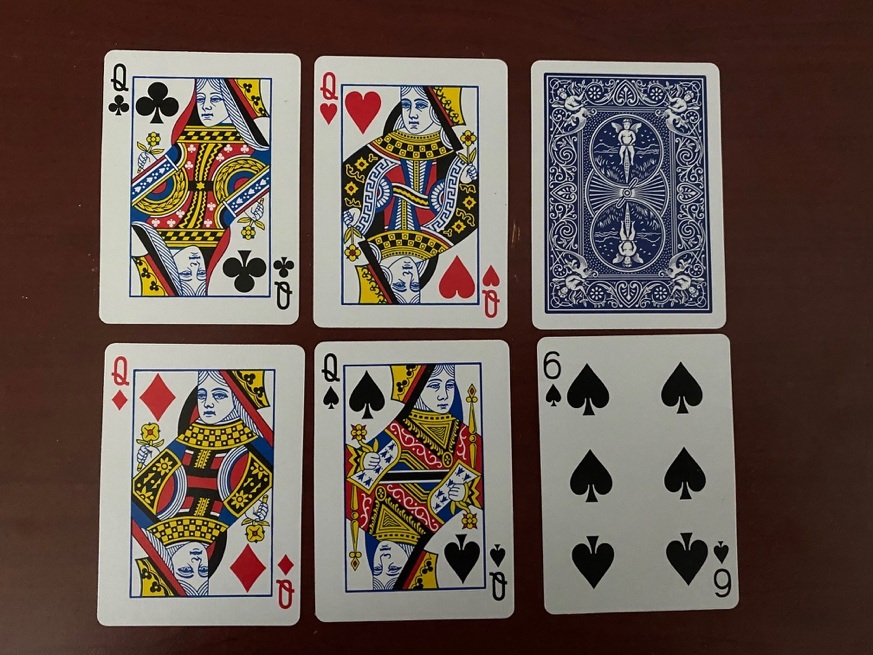 If you want your card game to last even longer, try playing more rounds! The 9 rounds can go quickly with less than 4 players, so try 18 rounds instead.

Our goal at AEC Info is to provide great reviews of Golf equipment, golf products, services, and training aids. We do the research to help you find some of the best deals on golf online.