As you get better at golf, it becomes more and more important to work the golf ball from side to side with different golf shot shapes. Sometimes hitting the ball straight shot after shot, is not enough to lower your scores. Hitting both a draw and a fade can be helpful and lead to lower golf scores.

Knowing when to hit a draw vs. fade and knowing how to hit both of these shots is a crucial step in lowering your handicap. If you have always wondered what the difference is between hitting a fade and a draw, we have you covered.

What Is The Difference Between A Draw And A Fade?

A draw is a shot that starts on a straight path and then turns slightly left as it flies; the fade golf shot starts straight at a target and turns slightly right while it is in the air.

The draw and the fade are both very controlled shots that likely only turn enough to keep golfers on the green. Sometimes when a golf ball draws, it only turns a few yards, and it falls to the left of the target. Draw shots and fade shots are much different than hooks and slices.

Is it Better to Hit a Draw or Fade in Golf?

Traditionally speaking, a draw tends to be a better shot than a fade. Although there are golfers that will believe otherwise, to hit a draw, you will have had to release the club properly with a square clubface. Fades, on the other hand, can happen when the direction and path are slightly open. Sometimes this is intentional, and other times golfers fade the ball unintentionally. 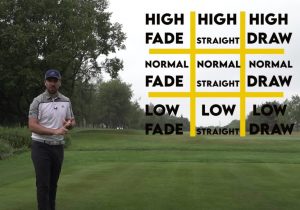 Golfers need to consider their game’s strengths when they decide whether to play a fade or a draw. Some golfers have a natural draw shot shape. If your normal trajectory and ball flight is a draw, you should continue with that as often as you can.

There are, however, times, for instance, on a dogleg hole, or if a pin is tucked into a corner, that hitting fading the ball is necessary. The fade is a shot that every golfer should learn how to hit so they can adjust their swing and hit better approach shots to the green.

The fade can be more reliable than a draw from the position of control. It is easier to control a fade than to control a draw. Sometimes a draw starts to get a bit too much movement to the left, and it causes the ball to hook a bit more than necessary.

However, the real issue here that needs to be considered is the player’s natural swing and how they manipulate the clubhead through the impact position. Hitting a draw golf shot is easy if your natural swing path sends you a bit from the inside.

Hitting a fade is easy if you tend to hold the clubface slightly open as you swing inside out. Essentially to become a better player, you need to tun into the natural strengths and benefits of your swing. Without doing this, you will struggle to become consistent.

Is a Draw Longer Than a Fade?

A draw can be longer than a fade because hitting a draw will lower the loft and the spin rates. Players that hit a draw will learn that the ball will release a bit more than a fade, and when it hits the green, it can be a bit trickier to stop. When you hit a draw, the clubhead will be able to provide less loft, therefore resulting in a bit more distance.

Studies have compared the draw and fade shots when it comes to the spin rate, ball speed, total distance, launch angle, and more. These studies have led to the overall conclusion that the difference in distance between a draw vs fade is actually quite minimal.

Most golfers think that a fade does not go quite as far as the draw because sometimes a fade can be a slight mis hit. If a golfer releases the club a little late, it will start to the right and turn to the right, looking like a fade. In reality, this was probably a bit of a mis-hit  or a push and not a traditional fade.

Easiest Ways To Hit A Fade and Draw Golf Shots

Now that you have a better understanding of the draw vs. fade, it is good to learn how to hit this golf shot. There is really no right or wrong way to hit draw shots or a fade. Many players approach this process with different mentalities based on their strengths and weaknesses. Here are some of the common golf swing tips for hitting a draw golf shot or a fade golf shot during your next practice round or game on the course.

Adjusting your golf stance is one of the more common ways to hit a fade shot or a draw. To get the ball to fade a bit, you will need to make sure your golf clubface is slightly closed, and your body is positioned more to the right. You would follow the opposite procedure to hit draws.

Certain golf equipment is built to hit the ball either to the left or to the right. For instance, if you purchase a draw bias driver or offset golf club, it will be easier to hit draws than fades because of the face angle and degrees of loft. PGA Tour professionals typically use a club face that is a bit more open, and it makes it easier for them to hit a draw or control the ball flight better around fairway curves.

You will have an easier time hitting a draw if your bath comes from the inside. Golfers who want to hit more fades will feel that their path is a bit more from the center and not as far inside. Path tends to be a difficult way to control the ball flight, and it is easier for pros to master this type of swing. Using your stance and your equipment to control your golf shots on the course is certainly an easier choice.

Golfers of all levels will debate for days about whether the left to right or right to left golf shot is the better one to hit. Pros and great golfers will tell you that to truly reach your potential; you need to play a shot that you can repeat.

If you can stand on the tee box and hit draw after draw, that is your shot. Understanding how to work the ball and get the direction you need when you need it is essential; however, keeping the ball in the fairway is the most important aspect of any shot you hit.

Thank you for your interest in AEC Info. We appreciate your viewership, and invite you to read some of our other more popular posts.  Please be sure to check back for frequent updates and new reviews.

By Tim Marose|April 6th, 2021|Golf instruction|Comments Off on Golf Draw vs Fade