Golf Slang – 15 Most Popular and What They Really Mean

Golf Slang – 15 Most Popular and What They Really Mean

When you enter into the crazy world of golf, you will continually be hit with golf slogans, sayings, and quotes. There is so much golf lingo out there that you will easily be overwhelmed when you first start playing.

As you get more and more rounds of golf in, your own personal collection of golf expressions and Golf idioms will expand and grow.

We have put together 15 of the most popular golf sayings and a definition as to what they each really mean. We highly recommend knowing the meaning behind the words before you use these your next afternoon on the golf course.

Grip it and rip it is a prevalent golf term that essentially means grab the club and swing. The idea here is that many golfers tend to overthink what they are doing on the golf course. John Daly is known as the “Grip it and Rip it” guy.

This is kind of a funny way to say, just grab the club and play golf. If you are a golfer that locks up over the ball, this is a perfect swing though for your next round.

2) Play The Course, Not Your Opponent 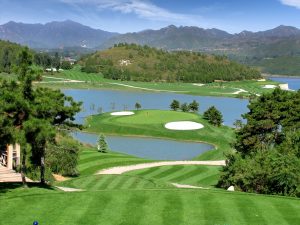 Even then, you play a match play event; you are really just playing against yourself and the golf course. Golf is an individual sport that is sometimes used as a team format. However, when it comes down to the person who needs to hit the shot, all the pressure rests on you.

When you are playing a serious round of golf, it is most important to shoot as low as you can, regardless of what your opponent is doing at the time.

3) Cinderella Story… out of nowhere 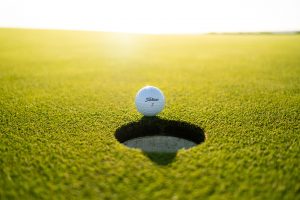 Cinderella story is when a golfer with a really bad day suddenly hits a perfect golf shot or putt. Essentially we have all had those difficult days on the golf course where your clubs are ready to take a flight towards the lake.

The Cinderella Story is the shot that you hit through the trees onto the green about a foot from the pin. These are the ones that keep you coming back to the game week after week.

The saying became popular after Bill Murray’s scene in the golf classic Caddyshack in 1980 discussing the golf game of an unknown and his attempt to win at Augusta National golf course.

4) Championships are won at practice

To become a great player, you need to practice a lot. Ben Hogan once said, “the more I practice, the luckier I get.” This was his funny way of saying that you have to put the work in if you want to play great golf.

The best way to improve your game is by practicing. You can also improve your score by improving your short game. The Short game shots includes putting, chipping, pitching, sand wedge shots, bunker shots, pitch shots, chip shots, and so on. See our Chip vs pitch vs flop post here.

The most important part of the short game is the putting green. It is the only place where you can make mistakes without hurting yourself or others. If you are not hitting it well, then you should take some lessons from a professional instructor.

Those that are great players are swinging golf clubs and playing golf every single day. Practice makes perfect!

Who’s your caddy is one of the phrases that is really playing off a more famous saying of, “Who’s your daddy.” Golfers will sometimes use this when they hit a really great shot that they were not expecting.

This is a slogan or saying used in a more informal round of golf when you are playing with friends. Many of these phrases and quotes you have to make sure are a good choice for use when playing with people you don’t know.

Go big or go home refers to those times when you are trying to hit a fairway wood like your 3 wood from the rough 250 yards over water. Chances are you have never hit a 3 wood further than 200 yards in your life, but the idea of pulling off this shot makes it worth it.

The movie “Tin Cup” staring Kevin Costner famously refers to “Go Big or Go Home” while the star of the movie, Roy McAvoy tries to carry his fairway wood 250 yards against a slight breeze over a water hazard. 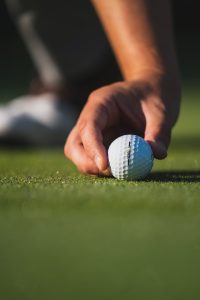 Be the ball is mostly about the mental game. This means that you need to consider what the golf ball will do as it moves towards the hole.

Hitting a golf ball at the hole is not the only way to be a great player. You need to plan out shots and make sure you are considering slope, break, and difficulty level.

8) Drive For Show Putt For Dough

The drive for show putt for dough saying has to do with the fact that the most important shot in golf is, without a doubt, the putt. If your putter is not working, you will find out quickly that your score cannot be low.

As you start to make more putts, the game becomes much more enjoyable. So although Tiger Woods, or Gary Player, or Jack Nicklaus can drive the ball impressively well, their putting and the ability to Read greens so well is what has won the events for them.

Golfers with the frequent inability to hit the ball in the fairway will often be discussed at the 19th hole.  See below. 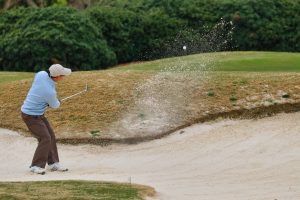 Sand traps are a part of every golf course. They are areas where the golf course designer decided to build a large mound of sand so that the golf ball could be stopped by the sand. These mounds of sand are designed to slow down the speed of the golf ball as it travels towards the green. The sand traps are usually located near the greens on the course.

When you hit your golf ball in the sand trap, you will say “At the Beach”.

The 19th hole has almost always been thought of like the bar after a round of golf. Whether this bar is used for an adult beverage or a great sandwich, one of the great things about playing golf with friends is getting to socialize with them after a round.

Many golfers will go over their scorecards and sign them if there is a match, or golf will not even be the topic of conversation. However, you should know that the 19th hole in the restaurant or bar at the clubhouse after a round of play.

Don’t forget, the 19th hole is also where the golfer who makes his hole in one will buy drinks.

Cabbage is the long grass in the rough. When you hit your drive a little to the left or right off the tee, you can wish for it not to wind up in the cabbage.

The cabbage is not considered a penalty area, but is a term used because the grass is thick, rough and it ends up grabbing onto your clubhead as you try and swing through the shots. In general, this is a funny way of describing an area of the golf course where players would rather not end up.

It’s often described as being like trying to play golf on a mattress. It’s just too soft and bumpy for most players.

“Cabbage” is a euphemism for “rough.” Rough is what we call the areas of our fairways that are covered with tall grasses (or weeds). We don’t have any other kind of rough. If you’re hitting into someplace that looks like it might be called “rough,” then you’ve probably been playing into something else.

See our post on Which golf club to hit out of the rough.

A worm burner is a shot that never leaves the ground. As you can imagine, a golf shot like this would end up taking out a few worms along the way. Many beginner golfers hit this type of shot; however, the lower handicap players are not immune from the occasional worm burner.

It is not very common to see professional golfers like Tiger Woods, Jack Nicklaus, Arnold Palmer or Lee Trevino to ever hit a poor shot like a worm burner in a competitive match.

The ball flight on a worm burner is non-existent since they never really get up in the air. Worm burners typically don’t go all that far; as far as golf sayings go, this is probably one you will hope you don’t have to say all that often.

If you are struggling with hitting worm burners, check out our post on how to Stop topping the driver here.

When you air mail a green, this is golf slang for hitting it way over the green. You know those golf shots where you really get a hold of the ball, and all of a sudden, you hit a 7 iron about 20 yards further than normal. This happens to quite a few players when all the golf swing parts come together and a perfect connection with the golf club is made.

One funny golf saying that players will use is that they air-mailed the green. This typically means that the ball did not even have a chance of stopping on the green; instead, it flew directly over.

This is one of the most common golf sayings and one that you will likely start to use right away if you are a new player. On the dance floor means that you are on the putting green.

If you are on the dance floor, you are switching to your putter and trying to start holing the ball out. This is one of those positive golf sayings or golf quotes that you will enjoy hearing people say about your game of golf.

Last but certainly not least on our list of golf sayings and golf quotes is the fried egg. The fried egg is a way to describe a lie that you get in the sand bunker.

Sometimes when golf balls hit a sand trap, they tend to make a small hole with a ring around it. This type of lie is referred to as a fried egg, and it is typically not a favorite shot for most golfers. You will have to spend a bit of time practicing how to hit a fried egg lie with your sand wedges.

Hitting a fried egg out of the bunker requires you to open the club face wide-open with your angle of attack being a few inches behind the ball during the golf swing. The ball flight after impact of a fried egg is unpredictable at best.

Pin high is a term for a golf shot that is hit the proper distance, but misses the golf hole left or right.  A pin high golf shot can be inches away from the hole, or 50 feet right or left of the flag stick.  A golf shot that is pin-high doesn’t mean that the shot was hit perfectly as you could easily blade your approach shot, roll through heavy rough or sand, and end up 20 feet right of the stick.

Although this shot would be considered Pin high or Hole high…..it doesn’t mean it was a great shot.

Got some other popular golf sayings? Please send them to AECinfo.org and we will be sure to include them in our next revision.

By Brittany Olizarowicz|August 26th, 2021|Information|Comments Off on Golf Slang – 15 Most Popular and What They Really Mean