If you are looking for the Best hybrid golf clubs for high handicappers, then you’ve landed on the right site. I’m sure you’ve been told that hybrids can help you master your irons, and that’s generally true.

Hybrids feature larger head profiles, perimeter weighting, more offset, and a larger sweet spot. All these features work together to help you deal with any tough lies and consequently lower your score. 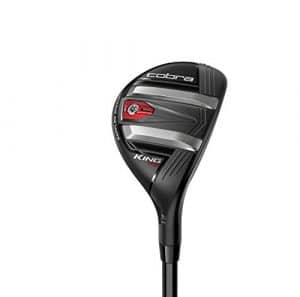 Cobra Golf is commonly known as a golf manufacturer that focuses on forgiveness and game improvement concepts. No wonder then that King F9 Speedback was the ultimate, last year’s leader in carry and ball speed consistency.

Design: It features a symmetrical shape at address, and it is about 10% larger than its predecessor. The clean, matte crown and the alignment aid deliver substantial help, particularly if you are struggling with the setup.

Technology: Since it is Cobra Golf we’re talking about, you can be sure that it is a technology-infused hybrid. The hype is on the Speed back baffler rails, and tungsten weight positioned back and low for a lower CG (Center of Gravity) and better turf interaction. This will also help you with the launch, as that’s the biggest problem that high handicappers face.

Performance: It is the maximized distance that made the F9 very popular among high handicappers. Plus, the lower toe and the square leading edge to push the ball upward to create a high-launching trajectory, while the stainless steel face flex features a larger sweet spot, more forgiveness, and speed. 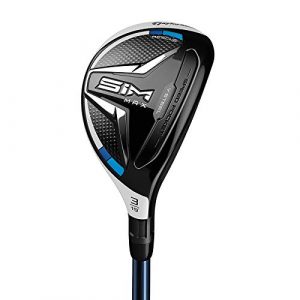 TaylorMade loves to refer to their hybrids as rescue clubs, and they are not far from their obvious purpose- to provide a rescue from any tough lies and help golfers when they need to use their long irons.

The SIM MAX rescue is a new league, it is the latest rescue release of Drivers and Rescue clubs coming from TaylorMade, and it is designed to provide aid to golfers of all abilities, not just high handicappers. Well, Rory Mcllroy was seen having one in his bag, but that could be added to the marketing hype as well.

It combines a blend of trendy looks, superior sound and feel, Forgiveness, and optimized performance.

Design: It looks very clean and reminds a lot of last year’s M6 Rescue, which was also a very popular model among high handicappers. The crown features a carbon fiber look, even though it is steel construction with a contrasting topline. What we see for the first time in TaylorMade hybrid is their V steel sole that reduces friction and adds on the club’s versatility when playing from difficult or tight lies.

Technology: The whole club speaks advanced technology. What we’ve seen previously and proven to work very well is the Speed Pocket that increases the flexibility of the sole so that mishits on the lower face area turn out to be quite successful shots. The Twist Face design features corrective face angles so that you gain more speed and distance even when you hit off-center.

Performance: As a replacement for the long irons, you can surely expect better performance. It achieves more speed, higher launches, and more consistent and predictable yardages. It is more about accuracy rather than distance. It can be easily called one of the most versatile hybrids designed to allow you to approach from different angles. 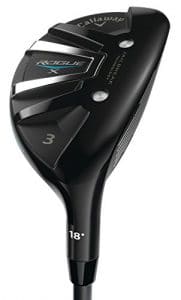 This is not the latest Callaway hybrid. Actually, it was released before the Epic Flash hybrid was released; however, if we are about to recommend a hybrid golf club for high handicappers, this one does the job perfectly.

It is the first Callaway hybrid that features the Jailbreak technology with the two bars that connect the sole with the crow, and it is a larger profile hybrid, with a more rigid steel structure for a greater energy return.

Design: The Forged Face Cup is thinner and lighter and delivers much more flex so that the ball flies with faster speed. The head is mid-sized, a bit longer, and deeper than their previous models, with a fixed hosel and much lower CG.

Technology: We have already mentioned the Jailbreak and the Face Cup technologies that complement each other to deliver straighter and faster ball speeds. The ultra-thin face features a larger MOI making it more forgiving, and together with the Internal Standing Wave (low sole wave pad), locate the CG deep and low for a higher and easier launch.

Performance: Performance-wise, the Rogue X is an excellent replacement for the long irons as it is a very forgiving club that will help you easily launch the ball at a substantial speed, particularly if you are a high handicapper. 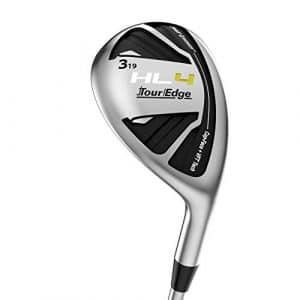 When you mention the name of Tour Edge these days, the first thing that comes to your mind would inevitably be value for the money. Within the last few years, the Tour Edge releases have been technology-infused, but unlike many other brands, they never imposed insanely high prices.

The HL4 hybrid belongs to last year’s release of the HL4 series, which focuses on the concept of game improvement with the idea to aid high handicappers’ tools to fix their strokes. This means it is intended to appeal beginners and all those high handicappers that seek an easy-to-hit club that successfully launches the ball into a far-reaching trajectory.

Design: Despite the constant criticism of the not very appealing design of the game improvement clubs, the HL4 hybrid looks classy with its gloss black crown and the contrasting silver edge that provides an excellent alignment aid to square the face.

Technology: The Cup Face has been redesigned compared to its predecessors, so it is thinner, and it features a higher COR and much more forgiveness, as the sweet spot expands throughout the face. The shallow design distributes the weight into the sole with the help of the Power Channel, positioning the CG low and deep so that it gets very easy to launch the ball.

Performance: The high-toe face design, the maximized face flex, and the low CG allow golfers to play any positions where using a long iron is necessary with extreme ease. This is one of the easiest hybrids that deliver high flying trajectories and add more distance. It also delivers good feedback on hits and misses.

The oldie but goodie RBZ rescue club is an outstanding hybrid that still delivers an amazing performance on the course for high handicappers. It still holds the prime of being one of the most sold hybrids on the market as it was intended for all players. However, it is the high handicappers who benefit the most from it.

It can help you achieve towering trajectories and an added distance, particularly if you strive to get the ball further.

Design: The satin black crown looks powerful and impressive with the TaylorMade logo on it when you set it up at address. It features a shallow profile and excellent alignment aid to better square the ball.

Technology: One of the most popular and functional TaylorMade technologies is the legendary Speed Pocket, an insert that helps you launch the ball easier and higher without creating an unnecessary spin. The CG is strategically placed lower thanks to the mass pad located on the sole and helps to reduce the turf interaction.

Performance: This hybrid club has proven to be a game-changer for high handicappers. It is particularly versatile and it can come handy for shots off the fairway, out of the rough, and even off the tee. It is very easy to hit, it delivers high, booming trajectories with added speed. If you are struggling with speed and distance, and your ability to use your long irons, this can be your ‘game-fixer.’

Sunday golfers, beginners, and budget golfers usually get acquainted with Pinemeadow clubs once they start to take golf seriously. It is one of those brands that offer value for the money, and it usually turns out that you get more than you pay for.

Excel EGI has been such a surprise as once it was launched on the market it shortly became one of the most popular Hybrid golf clubs for high handicappers. It represents an interesting blend of functionality and simplicity, and perhaps that’s the key to its popularity among golfers.

Design: Game improvement clubs are notorious for their looks. However, the Excel EGI looks elegant with the slender, aerodynamic design, and the black finish.

Technology: While it is more than evident that it doesn’t come with all the bells and whistles, the cavity stainless steelhead, the perimeter weighting, and the large face design are more than sufficient to deliver high launching ball flights with more speed and distance.

Performance: One thing is for sure. The Excel EGI hybrids are designed to meet the needs of high handicappers and beginners who have no or little skills with the irons. As these hybrids come in 8 loft options, they replace every iron through the pitching wedge, so they do provide versatility in terms of choice. 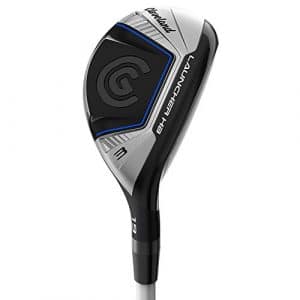 The Launcher HB line has proven to be Cleveland’s most successful game improvement line that features an upscale design and technological advancement. Cleveland never rushes their new releases, and when the company offers something new, then it turns out it has been a breakthrough in a certain way.

This hybrid golf club has been here with us for two years now, and even though the Cleveland Launcher Halo is a newer and fancier model, we picked the Launcher HB as it is simply unbeatable in delivering utmost performance for high handicappers.

Design: The larger and longer head design immediately speaks more forgiveness, but it doesn’t look clumsy and cheap at all. The glossy black finish with the contrasting silver line sweeps around the toe giving an impression that the face is open (it’s not tough).

Technology: The key technology is the HiBore Crown, which lowers the crown into a steep design so that the CG gets lower and therefore helps the golfers deliver higher launches. The sole features the so-called Flex-Fin technology that delivers more energy return at impact and, therefore, more speed and distance.

Performance: Cleveland Launcher HB does what you would expect from it to do, i.e., it will help you launch the ball and see it flying straighter and further. It is a very forgiving hybrid that delivers good performance even to off-center hits, with solid feedback and a balanced feel.

And The Winner Is…

All these seven hybrid golf clubs for high handicappers promise improved performance and a much more viable alternative for your irons. While their difference is seen in the construction and the technology with reflection to their price tag, we have selected TaylorMade SIM MAX as the most versatile, most promising, and the most advanced hybrid golf club for high handicappers.

It has been recently released, features an oversized head design, is highly forgiving, promotes speed and distance, and is of premium quality.

Check it Out On Amazon
By admin|June 10th, 2020|Golf, Golf Equipment|Comments Off on Best Hybrid Golf Clubs for High Handicappers
Go to Top