When playing golf, it is rare that a shot will actually go straight. Most of the time, players put some type of sidespin on the ball. Sometimes this is intentional other times; it is based on swing path or swing plane issues.

If you notice that you are hitting a low fade or a high fade, it’s a good idea to understand the difference between the two and how they are occurring. If you are wondering if the shot you are hitting is a good one and if it helps you score lower, we have all the info you need.

A low fade is a shot that never gets all that high in the air, and it travels from left to right. A high fade is a shot that flies at the optimal arc and falls from the left to the right. Understanding how these two ball flights are going to impact your score is essential.

Does a high fade or low fade go further?

Most of the time, when you are hitting a fade intentionally, the club face will be a little open at impact. With the open club face, you will get a little extra ball flight, and that left to right type golf shot that we all know as a fade. 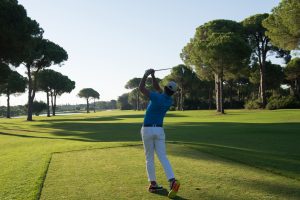 Fades are great as they are known to land softly on the green and give a player a much more accurate way of attacking the pin. The problem with the low fade shot is that it is not the proper ball flight for getting the ball to spin.

Some skilled golfers can put a low fade on the ball and get it to spin enough. However, most of the time, if you are hitting a low fade type golf shot, it could be considered a bit of a mis-hit. Several issues could be causing this, including improper aiming down the target line or extra body movement through impact.

In the end, the higher fade tends to go a bit further because the golf ball was probably struck as it was supposed to have been struck. Better contact is made with a high fade shot, and therefore you will get some extra distance.

Is a fade a good shot for distance?

If you are looking to hit the ball further, then you should hit a draw. When you hit a draw, your club face is a bit closed, and you have no choice but to release the golf club fully. The combination of these two factors will, without a doubt, will increase golf ball distance and travel further.

A fade is likely not going to cost you distance; it just won’t result in the same distance that hitting a draw will. However, when you look at approach shots into the greens, sometimes the shot shape and distance of a fade can be a better choice. Which is right for you..a Golf draw versus fade?

Golfers that hit draws can have a hard time getting the ball to stop on the green. This is because of the top spin that is placed on a ball when a draw is hit. Players need to consider if this is the type of distance they are looking for and how it should apply to their golf shots.

Improving your Average distance for golf clubs is always great, especially off of the tee. Distance on an approach shot needs to accurate more than anything else.

Is a low fade a good shot off the tee ?

Years ago, golfers felt as though low golf shots were going to cut through the air and give them much more carry distance. Now that advanced fitting solutions and 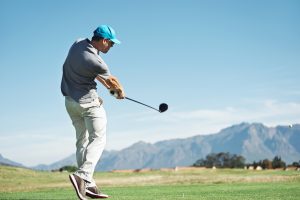 teaching professionals have realized things like smash factor, spin rates, club speed, flight path, shot arc, and spin axis, we realize that the longer your drive stays in the air, the further it will go.

Golfers should want to hit the ball high as often and they can. The higher ball flight keeps the spin rate on balls down, and players tend to get lots more distance.

There are times that a low fade can work for tee shots. Particularly when you are playing into the wind, hitting a low fade can be a smart choice, especially when trying to get to pins tucked away on certain golf holes. When we talk about the ideal shot shapes being higher, this can change based on golf course conditions.

A low fade is a good shot on a dog leg hole or when the wind is in the player’s face off the tee. If you are continually hitting a low fade with your driver, you may need to look into different equipment for your game like a Driver iron from the tee, or hitting hybrid clubs when trying to play this type of shot.

Easier to hit a high or a low fade?

As we mentioned, the high fade shots are typically hit for a reason. A golfer will adjust their stance and their swing to hit a nice high fade to their target. This type of shot, when well executed, can be a really great addition to your golf game.

A low fade, unless produced intentionally, tends to be a bit of a mis-hit. With this shot, you will likely get the feeling that you did not get all of the shot, or something was slightly off with the impact. The best thing you can do is learn what is causing your golf swing to produce these shots. Sometimes it is the player; other times, it is the equipment.

The high fade tends to be a bit easier to hit intentionally. Since a ball struck with a slightly open clubface will produce a left to right shot, the high fade is a very practical golf shot. People that have a natural draw swing should not fight against it in order to hit a fade. Always stick with what fits your game the best.

If you are a mid-handicapper or higher that can’t get off the tee box without hitting a low fade, it may be time to look for a fix. Chances are you are not getting the club head speed and distance that you are capable of hitting this type of a shot. High fade shots are a great option for a golfer to have in the bag.

Learning to control your swing path and be able to attack a hole from both the left and the right is essential. The debate as to whether a low fade or a high fade is better is a difficult one. The answer lies in what works best for your natural golf swing and game. If it feels right and you are shooting the scores you want to shoot, stick with it.

By Tim Marose|April 13th, 2021|Golf instruction|Comments Off on Low fade vs high fade