Even if you are not the biggest golf fan on the planet, major golf championships are something that are fun and exciting to watch. The majors mean so much more to PGA Players compared to a typical weekend event.

When you win any golf tournament, it’s a big deal, but winning a men’s major golf championship is really like earning a spot in the history books. Major winners like Tiger Woods, Ben Hogan, Jack Nicklaus, and Phil Mickelson would all tell you that their majors are their most special wins. Let’s take a look at the 4 major championships and some facts that you should know about each one.

What Are The 4 Men’s Major Golf Championships?

The four men’s major golf championships are the British Open, the U.S Open, the Masters, and the PGA Championship. Each of these events is unique. Golf fans will tell you that they have a favorite, but truly it’s hard not to enjoy a day of watching a major golf tournament take place. Here are some things you should know about each of the major championships.

The Master’s Tournament is the only one of the four major events that is played at the same golf course each year. The Master is played at Augusta National, and it is a very prestigious and special event. Golf fans enjoy the Masters because they have learned this course over the years. The course is nearly impossible ever to have the chance to play, but it is a special place to feel a part of each year.

Golfers competing in the Master’s tournament are almost always met with thick rough, and extremely tricky greens. August National is not the longest golf course on the circuit, but the greens and the difficult slopes give players a great test of the game.

The U.S Open is designed to help determine the best golfer in the United States. The U. S Open is played at various golf courses, and the course is usually picked several years ahead of the event. Some famous sports for the U.S Open include Pebble Beach, Torrey Pines, Winged Foot, and Bethpage Black. 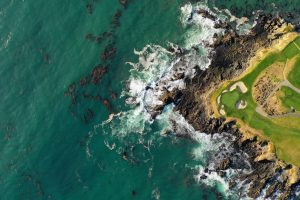 The U.S Open is usually held around Father’s Day, and most people will say that this is the premier event on the PGA Tour each year. Professional golfers that are crowned the champion of the U.S Open will win millions of dollars and exemptions that will last for many seasons.

PGA Professionals are the ones that are running your local golf courses and teaching people how to play the game. At the PGA Championship, there is a qualifying tournament across the country that allows a few of these professionals into the event.

The PGA Championship is all about honoring the sport as a whole and ensuring that all of those involved in the game is recognized as an important part of the process.

The interesting thing about the British Open is that the type of golf played is considerably different from the other majors. For a person that is trying to win all four majors, these four different events really set up a difficult challenge.

Sometimes players that can master Augusta will have no chance at a club like St.Andrews. This is just another reason to make watching the major championships even more fun.

Now that you have a better idea of what the four major tournaments are, there are quite a few questions about previous winners, courses, and record holders. The richest golf history is certainly related to the major events that take place.

What Is It Called If A Golfer Win’s All Four Major Championships?

If a golfer wins all four major championships, they have won the Grand slam. There are two types of grand slams that a player can win. They can earn all of their victories in one year, and it is a full grand slam, or they can win them over a career and call it a career grand slam.

Only five golfers in history have been able to pull off the career grand slam. Those players are Gene Sarazen, Ben Hogan, Gary Player, Jack Nicklaus, and Tiger Woods. No golfer has ever won all four majors in one year.

The closest that anyone in sports has ever been able to come was when Tiger Woods once won four majors in a row; they were not all in the course of one year.

What Is The Order Of Golf Majors?

The typical order of the major championships is the Masters, PGA Championship, U.S Open, British Open (although anyone across the pond is going to call it The Open). Years ago, the PGA Championship was held at the end of the season, but now the four majors are much closer to each other, usually spanning from April until July.

Who Has The Most Major Championships In Golf?

Jack Nicklaus has 18 major championships, which is three more than Tiger Woods. Tiger was making quite a run for it for a long time, but the latest injuries to his legs could make becoming a major champion again a very difficult task. Phil Mickelson has 6 majors, and Brooks Koepka has 4. They both have a long way to go to reach the number of wins that Jack Nicklaus has. It’s hard to say if golf will ever see this happen again.

Hopefully, you feel as though you have a bit more information about the major champions and when these tournaments are contested. If you are looking for a way to get addicted to the game of golf, watch a major championship from start to finish. Seeing history unfold and the pressure put on these players as they make their way around the course will inspire you to become a better player.

By admin|July 13th, 2021|Golf, Info|Comments Off on The 4 Men’s Major Golf Championships
Go to Top