The original Ping Eye 2 was released in 1982. However, this game improvement iron still remains in the bag of many loyal Ping fans today. There is something about these golf clubs and the impressive feel and performance that keeps people coming back year after year.

If you have a set of Ping Eye 2 irons and want to know if it is time to upgrade or are thinking about picking up a used set of Ping clubs, we have you covered. Let’s look at the Ping Eye 2 vs. modern irons so that you can make the best decision for your game.

Ping Eye 2 Irons At A Glance 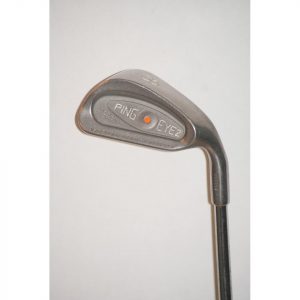 The Ping Eye 2 irons are perimeter weighted cavity back clubs with an offset hosel. These Ping irons were built to appeal to the average golfer in every way. At the time, these golf irons were nothing like other options available on the market.

The clubs had a better feel, used different materials, and had club head shaping that was nothing like the other irons available. The ball speed, distance, forgiveness, and workability helped many mid handicappers become low handicappers when the clubs first came to market.

Modern Irons At A Glance

The modern golf irons available to golfers will vary greatly from one manufacturer to another. Regardless of how often you play golf or how good you are at the game, there are options out there for you.

Modern clubs from Ping like the Ping i210 iron set and other manufacturers incorporate different materials, have undergone much higher levels of product testing, and some are even using artificial intelligence when they are created.

A modern golf iron makes it much easier for golfer to fine tune their performance on the golf course. Golf has become a much more customized sport since the Ping Eye 2 irons released in 1982.

If you are deciding between the Ping Eye 2 and modern irons or even a modern version of the Ping golf irons, here are the things that you will need to compare.

In today’s world of golf, ball speed is a very important factor. In almost all game improvement iron options, the ball speed gets faster and faster each year. In addition, when golfers take shots that miss the center of the clubface, the ball speed is still fast.

When the Ping irons were created, the multi material construction that we see in today’s modern irons was unavailable. Therefore some of the ball speed features were lacking, making it difficult for golfers to get the same distance control.

If you pick up a Ping Eye 2 iron today and put it on a launch monitor, chances are it will be a good ten to fifteen yards shorter than a modern version.

The modern irons will have a higher ball speed than the Ping Eye 2.

As we have mentioned, the modern version of many golf irons has customized and unique specifications. With the golf irons, the center of 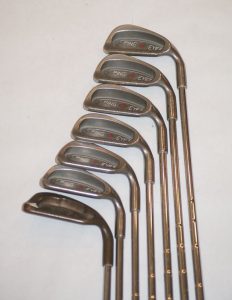 gravity and the lofts of each club have been optimized to work as an ideal game improvement iron. With the Ping golf irons, we saw something a bit different.

The biggest difference is the loft. The Ping Eye 2 irons have a 5 iron loft of 28.5 degrees. At the time, this was fairly standard. If you take a look at the Ping G425 irons, the 5 iron loft is 23.5. Through the years, the loft has changed about five degrees, and this is A LOT.

The difference you can get in distance from a golf iron that has five fewer degrees of loft is pretty significant. Players should realize that modern technology has allowed for a lower center of gravity and better launch characteristics to make up for the lowering of the loft.

The 5 iron has not become more difficult to hit because of these loft changes, it simply flies considerably further.

We should start this off by saying that the materials used in the Ping Eye 2 irons were revolutionary at the time. The clubs are stainless steel, will hold up for a very long time, and produce a soft feel at impact. However, today’s modern irons are almost all multi material designs.

The new irons on the market will feature materials like carbon, titanium, nickel, and even tungsten. The clubs continue to get lighter, easier to hit, and have improved feel at impact. These club still feature some stainless steel for the most part because of the durability and longevity of the material.

When Ping Eye 2 irons were released, they were only produced in steel shafts. Today there are dozens of steel and graphite shafts you will need to choose from when picking the game improvement iron for your game.

Ping Eye 2 used the same stainless that many clubs manufacturers use today; however other materials like Tungsten and Titanium are now incorporated into a golf club head.

The pricing of golf irons has continued to go up year after year. This is a long term problem that we will keep some golfers away from the game. When looking for a set of forged irons new from a manufacturer, golfers are paying well over $1000.

The Ping Eye2 irons were not this costly when they were first introduced. Although things like inflation and modern business practices have impacted the pricing of modern irons, the change is significant. Some golfers that can find Ping Eye2 irons that are in excellent condition may be able to save quite a bit of money.

The biggest disadvantage you will notice is the distance that you get when compared to a modern club. If that distance is not worth the money to you then sticking with the older Ping Eye 2 irons may be well worth it.

In the end, the technology has just come too far from 1982 to have the Ping Eye 2 irons compete. It is the truth that these Ping golf irons were some of the best that were ever made. It would be interesting for Ping to make the same club they did back in 1982 with the incorporation of a few new materials and the modern lofting.

This would likely be a set that would appeal to many golf enthusiasts and lovers of historical golf equipment. The Ping Eye 2 changed the way that golf looks at a set of irons, and for that reason, all players should try and swing them at some point in their golfing career.