If you haven’t heard of Polara Golf balls, this is a serious game changer! This innovation in golf equipment has the potential to instantly increase your game, and these golf balls have been around since the 80s.

Polara Golf balls are actually so powerful that the USGA and R&A have banned them for official tournament use. So to be clear, if you are playing in your Member Guest Tournament or Club Championship, you cannot play these golf balls legally.  If you are just out having some fun with your buddies, these golf balls are one of the most effective pieces of golf equipment you could own to play your best round.

Let’s talk about what makes them so powerful, yet controversial, and illegal for tournament play.

What is a Golf Slice?

If you are a regular visitor on AEC info, we apologize for this basic question. However, every golfer, from the pros to first-timers, has sliced a ball at one time or another. It’s such a common occurrence that millions of golfers have sought out training courses, Drivers with movable weights like the Ping G410 Plus Driver, offset clubs, and various other products to prevent it from happening.

Some techniques are more useful than others. However, when your golf balls are flying too high and veering off in the wrong direction, it severely impacts your range and accuracy. While there are ways to change your shot for greater control, it’s not as easy as it looks.

Everyone in golf wants to know how to keep their shots long and straight. However, many amateurs are never able to hit anywhere near their target. Without the time, training, and equipment necessary to get the ideal swing, every shot ends up in frustration and doubt.

Sometimes this is done intentionally. For every one of the nine or so basic golf shots, there are advanced techniques. For example, if you’re trying hit a fade that comes up high and stops on a dime, you’d use a high fade. In short, it’s intentionally slicing the ball to a certain degree to give the fade more vertical momentum.

The problem is that for many amateur golfers, this language is entirely foreign in terms of actual practice. Even though pro golfers drill and practice the basic shots, they can also rattle off dozens of these advanced shots and know the mechanics internally.

For someone wanting to learn golf for the first time, learning all of this information is a disaster. If you’re learning just one basic shot, getting the ball to go down the driving range, or finish a round of golf, it’s beneficial to have some guidance.

Fortunately, it’s possible to virtually guarantee that you’ll never unintentionally hit a slice. You don’t have to learn anything complicated and can have a great time playing golf, regardless of your experience level. This is precisely what Polara golf balls are designed for, and why so many golfers use them today.

Polara golf balls are legal to purchase and use in your golf games, however, they are banned by the USGA and the R&A for official use, and we’ll explain why.

In the 1980s, these specially designed balls were tested and confirmed conclusively to be absolutely effective in preventing slices. Some experts say that they’re around 75% effective, but the conclusion on whether they’re allowed is final. This was according to a trial by the USGA and the R&A. They made the ruling almost half a century ago that they provided too much of an unfair advantage in professional play.

Obviously, in top-level professional golf, the environment is extremely competitive. It’s a world-class trial of skill and ability designated with cash prizes, endorsements, and fame.

However, when you’re out with your friends and colleagues, Polara Golf balls are perfectly legal to use. Notwithstanding, private competitive events that have their own standards and rules, there’s no legitimate reason not to use them to improve your game.

As you gain a better grip of the club and familiarize yourself with the curvature of a natural golf swing, you’ll want a greater challenge.

Polara Golf balls do not provide so much of an advantage that you’ll be scoring a guaranteed birdie or an eagle. But, they will allow you to relax and have more fun as you master and gain finesse on basic shots.

In terms of being able to purchase a package of Polara Golf balls, it’s perfectly legitimate to do so online. They’ve been on the market and selling steadily since being released. In fact, the demand is so high for them, due to their seemingly miraculous ability to increase distance and straighten shots overnight, that they’re quite often sold out.

What’s more, there’s no shame in purchasing them. It’s not like you’re trying to fool anybody with a magic golf ball. As the name implies, they’re self-correcting, shot straightening, and increase distance.

You still get the full sense of pride and satisfaction of landing shots where you want them to go, making the game of golf a bit more enjoyable. The only difference is not feeling the bitter and undeniable disappointment of not knowing how to improve your shot.

How do Polara golf balls work?

Polara golf balls were designed in the 1980s by Polara, and marketed as self-correcting golf balls. They’ve since been recreated and improved with a new patented and exclusive design for an even greater effect.

To this day, they have three unique self-correcting balls available to all, which they manufacture under their own name: 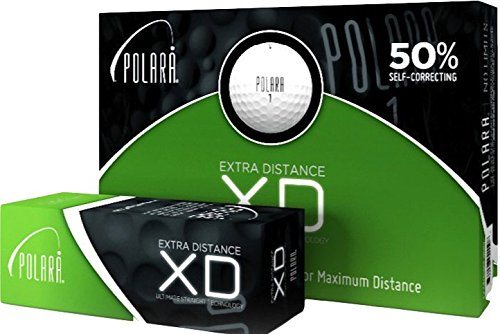 As the name implies, they’re meant to increase your shot’s upward trajectory and give you a greater distance on every shot. You can use any standard loft driver. They’re specifically designed to reduce 50% of the effects of a hook or slice, but ultimately to carry as far as your swing speed allows. 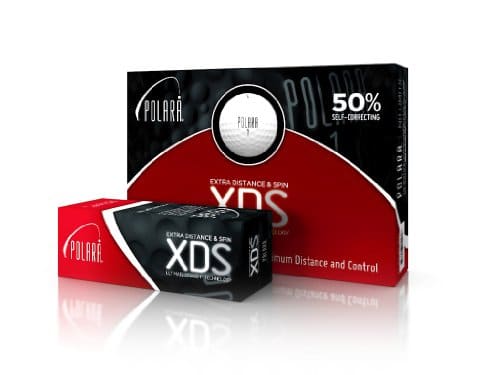 Also compatible with any standard loft driver, it’s designed to give you greater height and distance. The difference with XDS Extra Distance is that they’re meant to give you greater command over your shots to keep your ball in the fairways and out of the trees.

If you have a persistent hook or slice, and the game of golf is becoming less enjoyable, this golf ball is for you.

This flagship Polara Golf ball is designed for up to 75% hook and slice correction. They’re most common among brand-new players, who eventually graduate to XDs as their skills improve. Each ball has an arrow to point off the tee in the direction you want to hit. They have less aerodynamic lift compared to the other Golf ball you may play. You will notice a much lower than normal ball flight.

The core reason that Polara Golf balls are unmatched and unique from all other brands is their proprietary design. As they say, the proof is in the pudding, and in this case, it’s the polar dimple design.

In terms of knowledge required to use them, there’s a green arrow pattern printed on the equator of each ball. Along this axis, the dimples in the ball are shallow. The further you get away from this line, the dimples get deeper. This changes the spread of the ball’s weight, and thus the spin and trajectory of the ball.

In terms of knowledge required to use a Polara Golf ball, you simply line the ball up with the direction of your shot. However, while it creates greater lift with more precision and control, it doesn’t significantly affect the overall weight of the ball.

You can turn the ball so the arrow is pointing sideways, and it’ll negate its self-correcting effects. Likewise, no matter how you tee the ball, it’ll shoot just like a regular ball when you’re not hooking or slicing it.

Polara’s testing methods in proving the effectiveness of their balls is quite scientific. Obviously, the harder you hit the ball, the further and higher it will go. It’s only when you slice or hook the ball that it veers away and weakens the trajectory.

To make things objective and current, they continually test their balls against all other major brands on the market. While the performance rating for other balls may fluctuate over the years, Polara is always number one, and by a large margin. To do such a test, they use a golf shooting robot with exacting shot power and technique for complete accuracy.

Polara – the Only Golf Ball You Need

Polara golf balls are a guaranteed way to increase your range and straighten your shots. Because of their effectiveness, they’re not allowed for official tournament play. However, if you’re looking to have more fun and get into the sport while improving your game, this is the only ball you’ll ever need.

If you are interested in other golf related products we have recently reviewed, be sure to check out our review of the most comfortable golf shoes, our Square Strike Wedge review, and several of the driving irons we love for 2020. If you have a product or service you would like reviewed, please connect with us online.

All of Our Golf Ball Reviews