Pyramid Putters review – Does it Work as Advertised?

Home/Putter/Pyramid Putters review – Does it Work as Advertised?

Pyramid Putters review – Does it Work as Advertised?

If a golf company claims that they can knock 8 strokes off of your next round just by using their newly designed putter, a golfer serious about lowering their scores like me is going to pay attention and test it out. This is how I first found them: 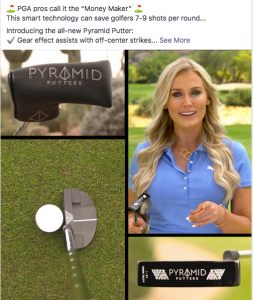 “Pyramid Putters” is a new name in the world of golf, and it quickly got the interest of many players who seek an alternative way to improve their putting skills.

The company has made a courageous statement, claiming that golfers can shave up to eight shots of their score each round, and that’s what has triggered our curiosity. Pyramid Putters has released blade and mallet-style putters that target golfers of different skill levels.

Both designs look surprisingly traditional compared to all unconventional putter designs, particularly the mallet. But, that’s just a facade that hides modern technology and functionality. The blade or the mallet, read our review to see which one is a better fit for you.

Distinguishing Features of the Pyramid Putters

Even though Pyramid Putters look very similar to many other standard putters, three distinguishing features mark them as unique and recognizable.

Face Grooves: This is the most peculiar characteristic that these putters feature. You’ll notice that the face grooves feature central horizontal grooves that are responsible for the topspin. And, that is what keeps the ball rolling forward without skidding or bouncing!

In addition to the horizontal grooves, there’s a specific, angled toe and heel milling that gives a pyramid shape. This also means that you are less likely to experience pushes and pulls as the ball tends to keep a straight trajectory. No other putter has such peculiar face design as Pyramid putters do!

Grip: It is among the first things that get your attention due to its size and shape. This is the grip you’ll see in all Aztek models of Pyramid Putters, and the feel you’ll get it the same regardless of the model.  If you have used a fat grip in the past, this is at least double the size. It is comfortable, but you must get used to it. The company claims that the size of this grip prevents the wrist from getting too involved during the stroke.

The parallel grip keeps the same diameter along the length of the grip. It features silicone dots design to help you keep the gripping pressure consistent as you putt.

Alignment Aid: Visual alignment is crucial to sink the ball into the hole, but not many of us can boast having the process of putting perfected. You either need to have mastered your skills to the point of perfection, or you need a putter that will help you get your eyes over the ball so that your putts stay straight.

This is why the Pyramid Putters feature grooves on the leading edge so that you have a visual guide to get lined up with the sweet spot and the target.

The Basic Principle Behind the Pyramid Putters 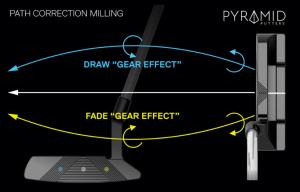 The key concept lies in the “gear effect” derived from the driver design. The thing is, drivers, particularly old ones, were designed to curve the ball flight towards the center of the fairway even if the point of impact was more towards the heel and the toe.

The Anser-style putter is as traditional as it can be as if trying to impose itself as a serious competitor on the golf market. Well, for a break-through putter that boasts revolutionized, a forgiving performance that can help you lower score adds to the overall perception.

The company opted for the most serious color on the spectrum and deciding to keep it black with an interesting matte-gloss combination. Namely, the top of the putter is matte, and that’s the right choice as it will help you deal with the reflected glare while the bottom is shiny black to add some contrast.

At address, it does look reassuring that you’ll score as the pyramid alignment aid is very indicative of where the sweet spot is, and it continues with the white line positioned on the back flange of the head.

The face features the horizontal grooves and the side 45 degrees milling lines that form the shape of a pyramid that continues of the front flange. The side mill lines help golfers maintain the off-center hits within the intended line of the putt.

What is worth pointing out is the visual lie angle, which helps you set a perfect line with the top of the pyramid on the front flange with the white line on the back flange. Only when these two are an ideal match can you be sure that your eyes are over the ball.

The AZ-1 is a blade putter that features even weight dispersion around the face that makes it a well-balanced putter. The toe-hang offset can help you deliver a wide range of putting strokes with forgiveness that appeals to a variety of handicaps.

Otherwise, you’ll find the same face grooving and milling featuring pyramid design and the visual alignment aid. The matte top and the glossy bottom are still there, in the black, of course, and the unique grip, too.

There’s a slight difference in the feel they deliver. The blade putter seems to be a bit firmer while the mallet is softer. This difference is a matter of personal preference. However, the overall effect of delivering straight shots is evident in both models. 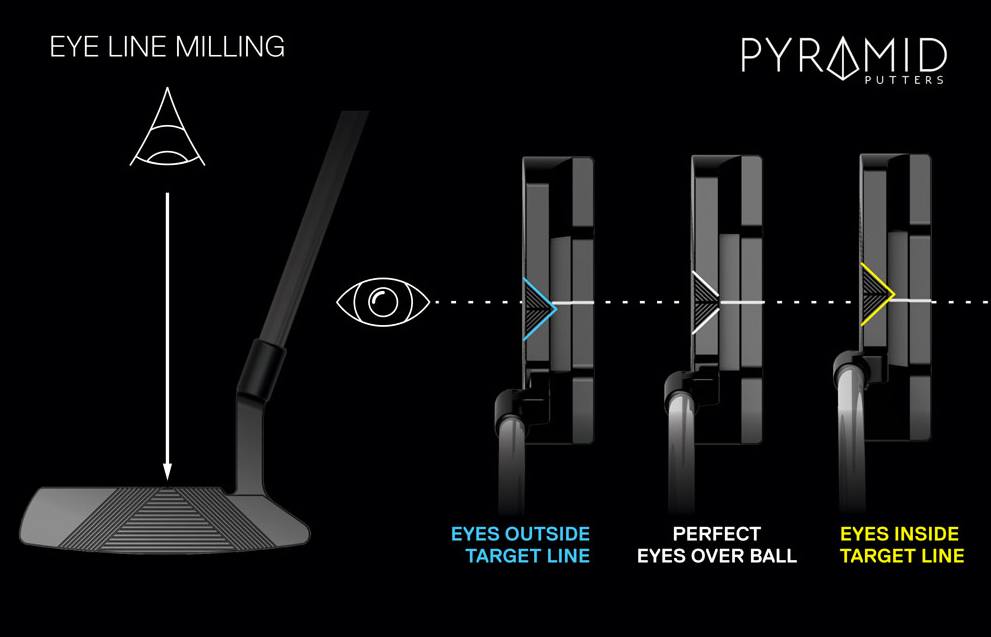 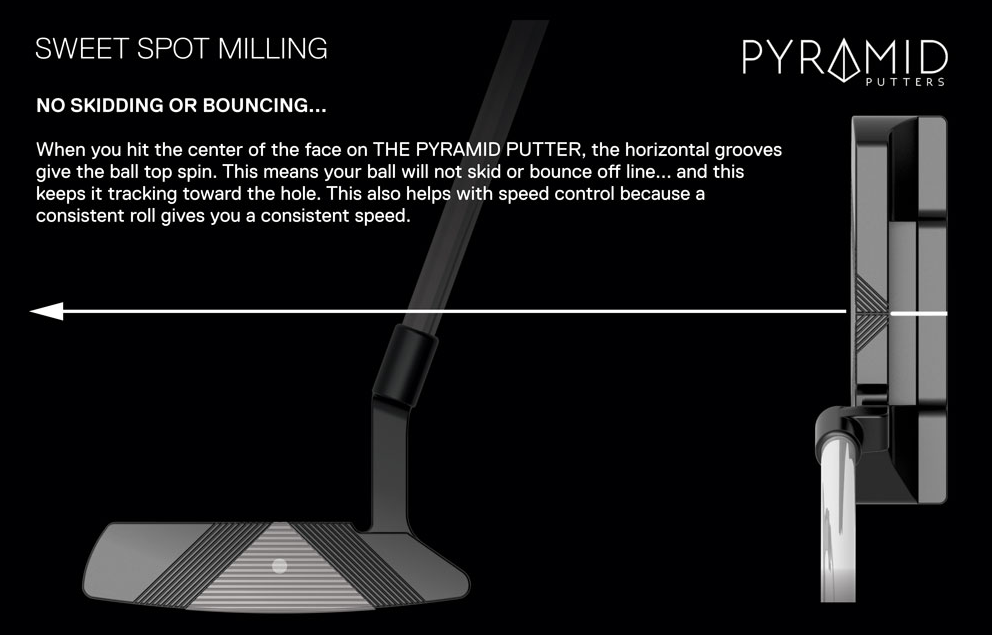 After using the Pyramid putter for a few minutes on the putting green at my local course, I was blow away with the amount of putts I was holing. The Pyramid putters claim to keep the ball online longer, and even if you mishit the putt, it will still stay on its intended line. I have to agree with this statement 100%. This putter stays on line for the vast majority of you putts. It simply strikes the ball and keeps it online.

The biggest challenge I have had with this putter after using it for the last month is distance control. I have complete confidence in the tracking line and the roll of every putt I hit. I struggle with getting the ball to the hole on slower greens. I struggled so badly, that I actually had to put a piece of lead tape on the back of the blade putter I started using, and still struggle getting the ball to the hole. This simply may be that my previous putter was much heavier, and it takes some getting used to.

After completing our Pyramid Putter Reviews, the Pyramid is still in my bag and what I continue to use during every round. I still struggle to get the ball to the hole, BUT, I am confident that when I Stroke the putt, it will be on the exact line that I chose prior to swinging. I really do like the putter, it feels good in my hands, it is pleasing to my eye and I believe it will lower my scores the longer I play with it. Right now, I still am struggling with the speed, but I know that is going to get better over time.

The biggest challenge I have had with my golf game has been my putting, and most notably, getting the ball to the hole. I have got the putter head on the perfect target line, read the green like a tour caddie, and still leave it six inches short. If I had a nickel for every putt I left in the heart of the cup, I could retire tomorrow.

So, I really do like this putter. The Pyramid Putters cost about $200, much cheaper than any Putter, Scotty Cameron model, and are well worth the investment it in my mind. For those of you that tend to push or pull your putts, this may be the game changer you are looking for. If you tend to leave putts short in the heart, then you may need to spend some time on the green practicing, but that practice should pay off very well in the weeks to come.

Check it Out On Amazon
By Tim Marose|July 13th, 2020|Putter|Comments Off on Pyramid Putters review – Does it Work as Advertised?