Review Of The Square Strike Wedge

If you are thinking about purchasing the Square Strike Wedge based upon the commercials you are seeing on The Golf Channel, then my guess is you are having some trouble chipping around the green. Obviously, you are not alone when it comes to not having a great short game. I play golf with so many guys that just pound their drives only to get around the green and “chunk” and “blade” every one of their chip shots. This was part of the reason I wanted to try this wedge and provide a legitimate Square Strike Wedge review.

Most of you reading this watch The Golf Channel daily for your golf-related news and information. You’ve seen the ads selling drivers, putters, wedges, and everything else throughout the course of the day. Now, most of these ads are attractive, with a celebrity often times endorsing a product, and they do seem to work for some people.  Will these clubs that are advertised all day long really improve your game or is it just a great piece of marketing that has you thinking about buying your next club online?

I decided to do the Square Strike Wedge review just because it is enjoying heavy ad coverage on the Golf Channel over the last year or so. Users seem to swear by its putting stroke swing and design. Again, we need to determine if it is great marketing or a golf club that can really help recreational golfers improve their short game and help us chip around the green while lowering our scores.

So, lets get started:

If you’ve used a chipper club, then the Square Strike should not be difficult to use. The design is almost the same except that it’s been hyped up to offer size and swing. The action is almost like a putter due to the extremely upright lie angle. The head happens to be more substantial as well. Just like other gold OEMs, it has a loft of 45 degrees which makes it almost like a pitching wedge. But there is a difference in the heavier head as well.

While using it, I felt that the head of the club was where most of the weight was placed. This created an accentuated pendulum-like movement just like when you are putting well. This will help golfers who are especially hands-on with their clubs. When using this club, you want to have as little movement as possible so you are looking to go back and through and get the ball rolling on the green. The Square Strike Wedge really does a good job of making this happen.

The sole is thick on this club, and it is supposed to help smooth movement on difficult lies. At the same time, it is supposed to help prevent fat shots and imperfect strikes.  The head also has an angled edge that prevents digging while playing. On the whole, the club seems to increase any kind of putting motion. As a result, players who often have problems with chunks and skulls will find it easier to use the club.

Unfortunately, the design does catch a few eyes as it looks very odd and is fluorescent green. Conventional wedges narrow down from a tall toe to a short heel, but this one has a roughly rectangular surface. It is similar in look to the original hybrids which is very square. The bright green back cavity will make it next to impossible for you to forget around the green. 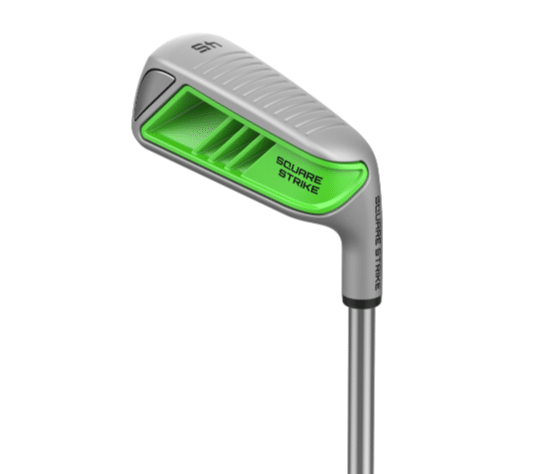 Does The Square Strike Wedge Work?

Surprisingly, it works very well. The first time I tried it out, I used the club on several different configurations on the fairway and rough. Despite my skepticism, the club performed wonderfully. Yes, it is weighted, and the design is a bit weird but is super effective and produced an excellent low running shot. In fact, despite my initial cynicism, you can see why this club is so popular because it can help any golfer get the ball on the green quickly rolling at the hole.

I did not want to limit my review to my personal experience with the club. There was a friend at my club that was experiencing the “yips” in his short game, and I had him hit some shots around the green for a while. He was taking a very large backswing on his chip shots prior to using the Square Strike Wedge, and he was moving the club excessively with his hands. After hitting some balls around the green with the Square Strike, he was able to replicate the same low running shots that I was able to hit. He agreed that the club was effective, but the big fluorescent green grip was not something he liked, and was a bit too proud to use a “game improvement” club as he told me.

Even though the club is good, it is restricted to just one type of low running shot. Any other kind of lie or lengthy shot would make the club useless. Yes, running shots are critical to success on a course, but shot options are necessary to adapt to different situations. If you decide to add this game improvement wedge to your bag to take on your next golf trip, it means you are giving up another club in your bag.

I tried hitting some short range shots from about 50 to 75 yards with the Square Strike Wedge. I did manage to hit them pretty well, but only when trying to hit a bump and run with minimal spin. The height was low as well. Swinging the club results in the lower running shot that speeds away on the green. This is good, but it is restrictive.

Who Would Benefit From The Square Strike Wedge?

The club works, but traditional golfers are going to have an issue with the design and loud green colors. It’s not a miracle club, but it improves the basic bump and run shot around the green. If you are a person who does not feel comfortable with wedge shots, and have issues with chunked chips and tight lies around the green, then this is the perfect club for you.

This is one of the best golf clubs for beginners because it helps you around the green and helps improve your scores. A golfer who struggles around the green is going to drop several shots a round using this club. The Square Strike Wedge is a game improvement club, not a golf training aid. I would recommend any newbie golfer try out this club as it does improve the basic game. However, its not a band-aid for an overall bad game. If you have terrible issues with chipping and pitching shots and you lose shots around the green, this club will help.

The wedge design of this club is made to go straight back and straight through like a putter.  Traditional wedges require a much longer swing, and this removes some of that margin for error. The putting motion on your wedge shots will get the ball on the green quicker, rolling at your intended target. It will definitely help you with chips shots to all distances, bump-and-run shots, and medium to long shots from bunkers.

I genuinely did not think that any club being sold through late night television ads would be effective improving your golf game. I was perfectly willing to get the club and then laugh at how naive I was for purchasing golf equipment from an infomercial. But I was and still am pleasantly surprised. The club works well, and I would recommend this club to any golfer who struggles with shots around the green. It’s easy to use, and it is particularly useful on low running shots. For golfers who are “handsy” with their clubs and suffer from chunks and hitting the ball thin, this may be a great club to help with your course management.  If you are a golfer who has a lot of yips on the fringe, we believe this may be a nice club to add to your bag.

If you are looking for some different wedges, be sure to check these out:

Although the club may look a little different than others in your bag, it is PGA approved and can be used in tournaments. My Square Strike Review is a positive one, and believe that any golfer who struggles around the green will benefit from it significantly. Low to medium digit handicappers may chuckle at its appearance, but there is no doubt that this piece of golf equipment will improve your chipping and putting and lower your scores. The question is….will you allow it in your golf bag? You can check latest price below.

Check it Out On Amazon
By Tim Marose|September 19th, 2019|Product, Wedges|Comments Off on Square Strike Wedge review – Waste of Money?

All of Our Wedge Reviews