If you enjoy international golf competitions with the best player in the world, you will want to watch this year’s President’s Cup. The bi-annual President’s Cup alternates between a course in the USA and a course anywhere else in the world. It will be played in 2019 at the Royal Melbourne Golf Club from December 9 to December 15.

This event brings together the best golfers from the USA and the rest of the world, excluding Europe, as the USA and Europe compete in the Ryder Cup. The President’s Cup is also unique in that there is no prize money! The event has raised nearly $50 million for charities since it began in 1994.

Where the President’s Cup Will Take Place in 2019 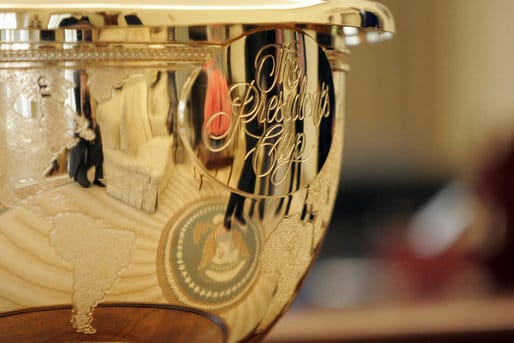 The 2019 President’s Cup will be played in Australia at the Royal Melbourne Golf Club. Royal Melbourne is a private club, founded in 1891 that routinely hosts Australian national and international competitions. Its two 18-hole courses are ranked first and sixth in AustraliaOya, and the West Course is regularly ranked in the top five in the world.

The President’s Cup will be played on the “Composite Course,” which is twelve holes from the West Course and six holes from the East Course. This “composite” course dates back to 1959 when the club hosted the World Cup. It features large greens that are surrounded by challenging bunkers and rough areas of native grasses.

What Players Are Playing in the 2019 President’s Cup?

The only golfers ranked in the top ten in the world who won’t be playing are Tiger Woods, who is a team captain and Rory McIlroy who is from Northern Ireland and therefore eligible for the Ryder Cup! Woods, however, could decide to put himself in the lineup during the tournament.

What Is the Format for the President’s Cup?

The President’s Cup is a series of match play events with twelve players on each side. Singles matches are played past 18 holes if necessary until there is a winner. Doubles matches are both best ball formats and alternate shot formats (also known as fourball and foursome).

Half of a point goes to each side of the match is halved. Otherwise, each match is worth one point for the winning team. The current format is for 30 matches, of which 12 are singles matches, 9 are foursome doubles, and 9 are fourball doubles.

For an exciting set of golf matches feature the best in the world at an exceptional golf course with all of the proceeds going to charity, don’t miss the President’s Cup from December 9 to 15.

The President’s Cup Is About Good Will, Sportsmanship, and Charities

There is no prize money given out for President’s Cup winners. Net proceeds are divided out amount charities that are chosen by the players, captains, and assistants. Nearly $50 million has been raised over the years and has gone to charities across the globe.