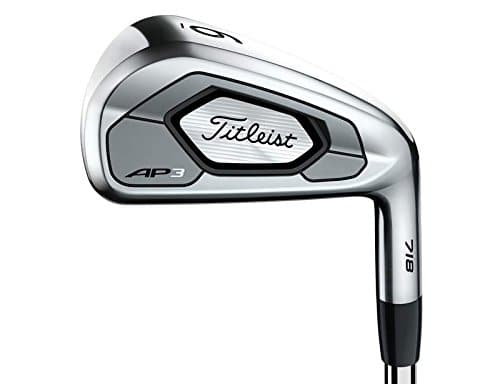 Titleist debuted their new all-new Titleist 718 irons collection during the PGA Tour this summer, which replaces all their previous irons from two years ago.

The retired Titleist 716 contained iconic irons such as the MB, CB, AP1, AP2, and T-MB – which are now updated on the new 718 iron set. The 718 series also include a brand new model – AP3, a model that caters to an emerging niche of distance technology irons that are designed for players who are heavily performance-oriented.

Let’s talk truth: Is it a huge step-up from the 716 series? The focus on the 718 series is to revamp the experience a performance player needs on the course: It implements a new design philosophy that aims to position the CG location in alignment with the center of the face, which inherently improves inertia and stabilizes off-center shots.

The 718 succeeded at this by combining advanced materials such as tungsten (in increased densities), upgrading the face technologies, and implementing new steel constructions.

Things To Know Before Buying Titleist 718

The chief of product development at Titleist said It’s about using new technologies that make sense and give golfers the most benefit. For example, if you’re trying to create distance from face technology, this is easily achievable by making the center of the face go far.

However, if you can match the points half inch out of the toe and the heel it becomes difficult. If you don’t have MOI as a focus, it becomes a deficiency. This is why we chose not to sacrifice there. He pinpointed to a test that Titleist engineers used, which showcase the distance that impacts have on a rectangle, including half-inch impact, high impact, low impact, right impact, and left impact.

For us golfers, the impact on performance can be astronomical. Once you combine a low center of gravity and a high MOI, we can adjust the center of gravity to have the most consistent numbers across the grid. The chief of Titleist product design said The new fleet of 718 irons satisfies golfer’s requirement in all-new ways, all within the same set.

The AP3 is the most high-powered iron from the 718 lineup. The AP3 differs to the AP2 and AP1 in this lineup. It’s a lot more ambitious in terms of technology and brings the highest speeds. If you want to shell out the big bucks, the AP3 is the all-around can’t-go-wrong set that utilizes a multi-faceted approach to this iron category and in terms of performance. It will entice all players irrespective of their handicap.

The AP3 set has three completely serrate constructions (all within the same collection!). The main leader of the set are the 3-through 7-irons, which are constructed resembling a hollow blade.

The insert is L-shaped and only 2.1mm thick, comprised of 455 steel that wraps around the soles. Want to have better flexing compared to traditional face inserts? Spend the extra bucks! This is all wrapped in a 17-4 stainless steel body.

The tungsten density is higher on this set, with an average of 84 grams (as opposed to 64 on the AP2 and AP1), significantly boosting MOI. For the 8 and 9-iron the set features 17-4 stainless steel on the face insert and solid-cast wedges. The AP3 is a progressive design with varying CG locations and sizes, which you’ll need to expedite movement across the whole set when you’re playing.

The AP3 uses cast 17-4 stainless steel. Meanwhile, the AP2 and AP1 both use forged stainless steel. Moreover, the density of tungsten (material located in both the heel and toe areas) is much higher, notably represented in the 3-7 irons, which improve your controlled performance by keeping the club square and disallowing you from making random twists and turns while you’re swinging.

The formula is simple: More tungsten = more balance = more consistency on swings. On average, the tungsten amount in AP3 irons is 78g per clubhead, which comprises 1/3 of the total weight of each iron.

What was the end goal of Titleist when they released the 718 series? It’s clear they tried to make a progressive design – and they succeeded.

Titleist managed to make sure the blade length starts long in the longest irons because golfers who want MOI will need an adequate size. Moreover, golfers can transition back to more compact or shorter irons when you need them.

The L-Face design of the AP3 line has a huge effect on low-face impacts. Titleist’s engineering team tried to make the points low on the face more consistent to allow the lower part of the face to move more. This successfully helps golfers improve the grid of their impact locations. The AP3 is an excellent set that is probably the most desirable Titleist has released by far.

There are similarities, though. Namely, the High Strength Steel face insert, which is a highlight Titleist feature (the same as on the AP2 and AP1).

High Strength Steel technology smoothens out the pre-worn leading edge. This way, the edge flows perfectly into the sole. In effect, this boosts your turf interaction and the MOI upon impact if you swing with the lower part of the club. The wedges are comprised of stainless-steel as well, for added stability.

Care about off-center distance performance? The AP3 irons were revamped to provide much higher ball speeds across the face. The all-new AP3 heads are injected with 84.9 grams of tungsten per head on average, giving you the distance and speeds you need to reach those long shots.

They’re the perfect compromise size-wise. They’re slightly bigger than the AP2 irons, but not as oversized as the AP1s in blade length. The AP3’s have something special – the ability to increase forgiveness without thickening the top line nor the sole of the iron. Titleist employed ingenious engineering to achieve this feat: They added a high amount of offset.

The only strange feature about the design is that the top line seems a bit thin, but nonetheless, we like the thin design.

The only negative aspect of the AP3 design is the sound; which professional players might be opposed to. It’s a hollow sound. The AP3 irons have a progressive cavity back design (basically the cavity is behind the badge), and in effect, the cavity increases as you progress towards the longer AP3s. This translates to a more hollow sound once you swing.

The longer irons are the only irons that receive criticism on the AP3 line, precisely due to the cavity back design. Titleist nonetheless did a great job at keeping this lineup minimalistic and compact, which is a standard sleek look we expect from a big name like Titleist.

The AP3 series is a huge upgrade from its smaller sister irons, the AP2, and the AP1 when it comes to performance. This is when the new hollow-blade construction starts to shine: The AP3s have a very thin and unsupported L-face insert that helps launch long shots with shot-stopping spin.

Another performance upgrade of the AP3 compared to other 718’s is the maximum forgiveness factor. The AP3’s leave a lot more leeway on the launch, and the tingles are not severe once you catch the ball thin. The offset does not impact the ability to control or maneuver the ball. The AP3’s have a tremendous feeling upon launch. Exactly what you’d expect from iron at this price point.

The AP3 is better than the AP2 and AP1: If you can afford it, go for it. Titleist’s AP3 is the culmination of the 718 lineup and the best of both worlds compared to the AP2 and AP1. It’s the most elite and feature-packed set of irons.

Titleist used the best information they accumulated from the AP1 and AP2 lineup and released the AP3 as their high-end product that features the best technology, the sturdiest build, and the best performance. The AP3 is Titleist’s longest & fastest iron.

The new hollow body construction on the AP3 means you’ll get a player preferred shape; however, this is combined with boosted performance on off-center hits. The AP3 is very precise when you cure it and then forgiving when you don’t. What more could you ask for?

The AP3 is a real feel-good set and is arguably the most desirable Titleist release in years. We ran testing with comparable irons, and our tests determined the new hollow body head matches, not only the performance of competitive irons from TaylorMade and Callaway. But, the AP3 is also an excellent long-distance iron that can launch shots a degree higher than the Most forgiving irons on the market.

Distance can be a selling point for the best golfers who are concerned about the maximum possible distance. The AP3 features excellent performance across the board, and it’s a real winner overall.

If you are interested in learning about other irons we have reviewed, check out our Ping i210 review, our Cleveland Launchers and our rundown of the best irons for the mid handicapper. Looking for something we don’t have online, send us a line and ask us to review.

Check it Out On Amazon
By Tim Marose|November 20th, 2019|Golf iron|Comments Off on Titleist 718 AP3 Review